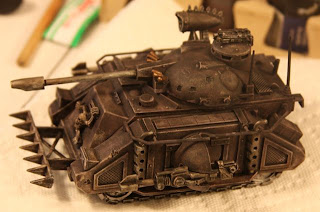 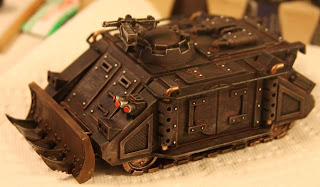 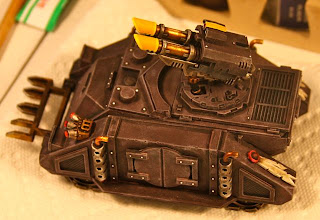 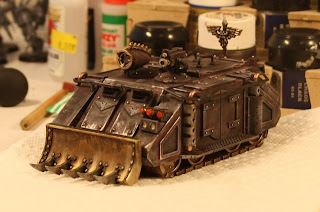 I've played and painted warhammer 40k for a lot of years. When the first rhino kit came out you got three rhinos per kit! My custom space marine chapter, the Iron Scythes, have a rather patched together relic-like motor pool. I thought about simple greening these tanks, and turning them into my chaos tanks, but I think they are kind of fun the way they are. All kinds of wrong bits, terribly thick painting, skeleton parts do not detract for me. Had I taken a shot of the bottom's of the tanks, you would have seen the original grey they sported when they carried the Imperial Guard! The predator and the demolisher are the only tanks that have always been space marine in the force. I am building up an Inquisitional force just so I can throw guard in rhinos again.
Posted by John Stiening at 1:47 PM