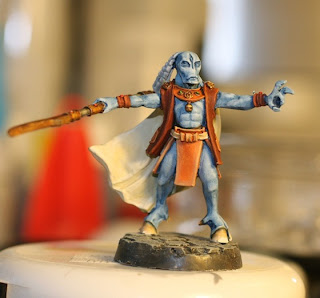 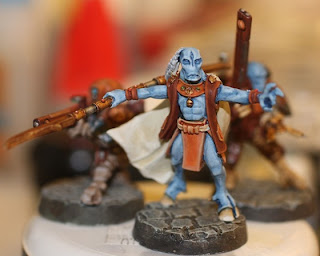 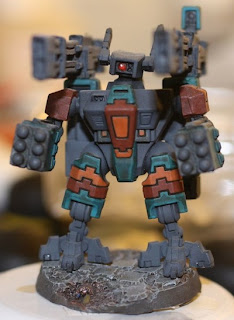 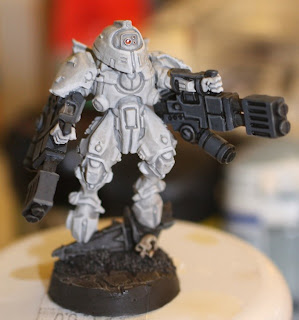 I know Tau Ethereals are supposed to be poor units, but I love the way this model looks, and am going to be hard pressed to not field him every time I get the chance. I have no idea why this model stands out to me so much, but it is a must have. Commander Shadowsun is so-so at the moment. I have her based, and am ready to start adding some more detail. I plan to add both blue and dark red to the model somehow, though I Have not figured out how yet.
Posted by John Stiening at 2:58 PM 5 comments: 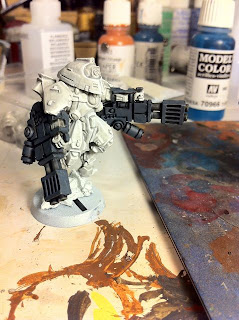 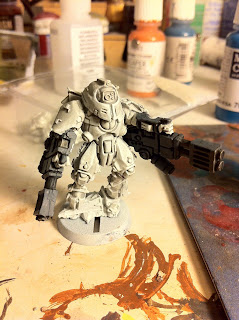 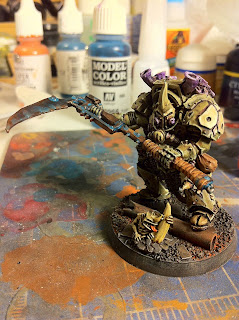 I started back on my tau after basing my Death Guard champion. My tau needed an HQ, so I decided to paint shadowsun. I don't paint white very often, but I think the white is turning out ok. It does not photograph very well, but in person it looks pretty clean. the trick seems to be two coats of a grey wash followed by white edge high lighting. She will stand out really well in the army. Some orange markings and battle damage are coming!
Posted by John Stiening at 8:20 PM No comments:

Typhus: Back On The Horse 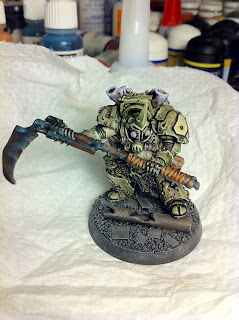 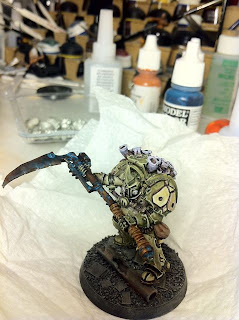 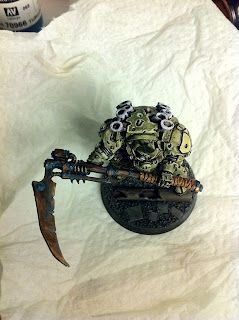 I have not posted much since my blogger versus blogger game. I sort of fell out of the painting cycle, and was focusing on airbrushing Tau tank after Tau tank. I almost painted Typhus by accident. The white primer was working really well last night, and he was sitting near by. The tau Ethereal I was working on was drying, so I picked up Typhus and started painting. I painted him to match my plague marines, though I think he is a little better looking. I have one more glaze to put on him to tie in all of the edge highlighting.
Someday I may even field a Chaos army!
Posted by John Stiening at 7:29 PM 1 comment:

I met Rob from Warhammer 39,999 last Friday, and we got in a fun game in using the battle missions book. I learned quite a bit about Alaska, before getting thoroughly stomped by my Dark Angels. Rob schooled me using an army with funky old rules, a pts deficit, and with poor rules familiarity on both of our parts. I'll leave the battle report to him, since he has the play by play. Suffice to say, I had a great time, and look forward to a rematch in San Diego!
In other news, I'll need to post images of my Tau at some point. I have been painting gun drones by the bushelful, which is not particularly interesting, but does make the vehicles look much better. Next up is a small dark eldar force. Yes, I bit the bullet and added yet another army to my painting table. The new plastics were just too good to pass up.
Posted by John Stiening at 7:50 PM No comments: