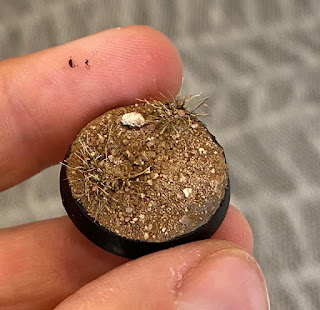 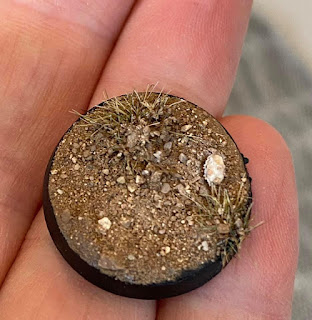 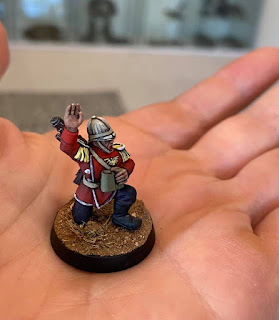 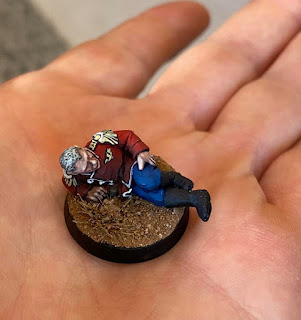 Sometimes the laziest method works surprisingly well. After completing most of my Praetorians, I turned my attention to basing them. I had initially planned on making new scenic bases and casting them. I even started the process of doing that. Then inspiration struck. I live in a desert. My guard live in a desert. Let's just crab some dirt from outside and super glue it down. I'm surprised by how much I like it. The test base looks pretty good to my eyes. I think I'll add more rubble and junk to the bases, but with just a few tufts only these work. Here's to effortless basing! 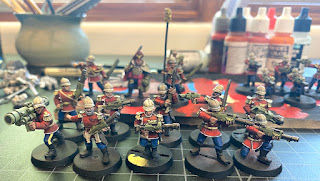 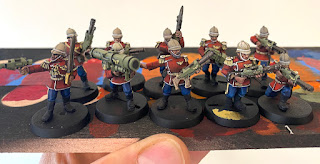 Time to share some more work in process shots of the new army. I'm loving how these are turning out, especially for such old miniatures. Once I get them based, I'll setup a light box somewhere for some better photos. Light here in Arizona is rather intense, so my usual practice of just taking photos from my desk won't work any longer. I think that is a small price to pay to live in this beautiful desert. If you were wondering, yes, these will be desert based!
Posted by John Stiening at 8:44 AM 6 comments: 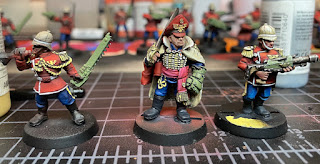 With the color scheme set, I soldiered forth with the rest of the army in a batch painting fashion. I'm very rusty, but I'm having a blast painting these guys. I thought the commissar was the commander, so I painted him up really un-commissary...er un-murder-deathy.

Now the big question becomes whether I can accumulate enough to field these guys in an actual force. I think I can scrape together two infantry squads, a command squad, and maybe two weapon team squads. Is that enough? I have no idea how Guard work in 9th, or how an army is even put together. What I do know is that these guys need a single suitable FW ww1 styled tank to accompany them. Which variant should I pick? I guess the easy path is the pick the most WW1 looking tank possible. 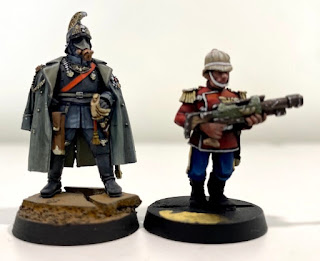 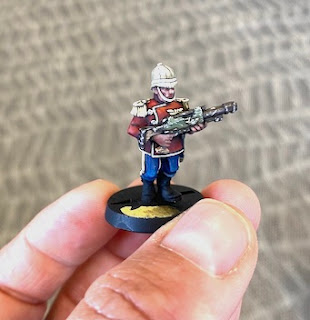 Ancient 40k models are lumpy, small, and fun. This is just a test model while I figure out which paints are still usable after our move, but it was a blast to paint. So many paints have gone bad though! Painting is a stinky moldy affair right now. Still, this was loads of fun. (Now have to go bleach my brushes) 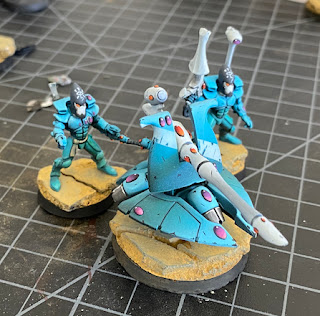 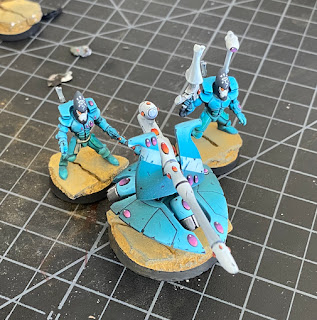 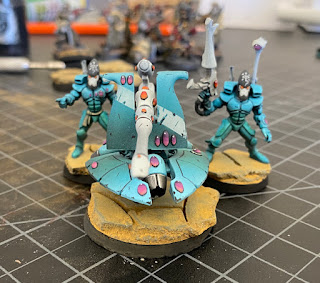 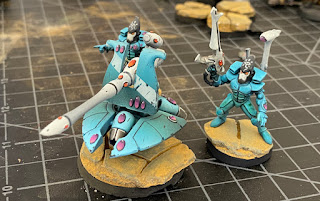 It has been many months, a 3000 mile move, and a lot of pandemic isolation, but I've finally started unpacking my miniatures and tip toeing into the hobby again. At this point I've unpacked hundreds of models, assembled the cabinets, and begun the long process of repairing what was damaged over many months in storage. So far things have arrive in pretty good shape. The most damage occurred due to the extreme heat here in Arizona and forgeword resin warping. Given our new desert environment, I had to grab some of my old bases and give them a try on these guys. I really like how this sets them off. Mymeara are traditionally on snow bases due to their fantastic artwork, but I think I'll stick with these. It was a nice way to dabble in the hobby while busy with home renovation.

The appalling behavior of many Americans in the wargaming community soured the hobby for me. The parroting of election falsehoods, racism, and pure unadulterated fascism on display have been eye opening. I won't game with a Trump supporter. I won't attend an event run by a Trump supporter. They have had far too much time to grok the evil that man perpetrated with the aid of most Republicans.

I don't know when it will be safe for people to game again, and I find it appalling that people are hosting tournaments here in the US, but when that time comes, at least I'll know who not to game with. In the mean time, let's try to keep our parents, grand parents, and vulnerable alive.

To everyone who takes the pandemic seriously now, I salute you. Hunker down and bide your time. By doing that we save lives. Patriotism, isn't a uniform or flag cape. It is sacrificing so other's might live.