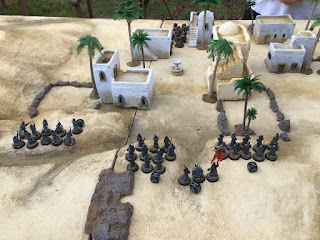 I like 40k. I hate the rules. I like Bolt Action. I like the rules. The natural conclusion here is to try and bring the tactical game play of Bolt Action to 40k. With this intent, Cheatin Steve and I  played two games where we experimented mapping bolt action rules onto 40k units. Both games would pit Steve's Orks against my Death Korps. The first game turned out to be a blow out, as we pitted a highly mobile ork force against an entrenched Death Korps forces. (the DKoK also had flame throwers in each squad) We also gave the Orks an 8 foot drive before the trenches. That game was interesting, but not terribly fun to play. I think the problem was that we had too many special rules. Realizing our mistake, we decided to pit two Bolt Action style platoons against each other. We gave the Orks SMGS and LMGS. The Death Korps had rifles and LMGS. Additionally we let the DKoK move and fire without penalty.

One of the surprising things about mixing and matching game systems, is how difficult it was for me to use 40k and play BA. I got the hang of it at the end, but spoilers here, the Death Korp suffered horrific casualties. 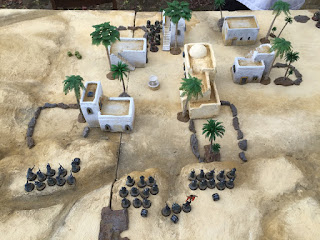 Our mission was to secure the town from an ork attack. The DKoK had not faced Orks before, so they had no firm understanding of ork capabilities.  The Korps took the high ground, in preparation for a dash into the two main buildings directly in front of them. The left squad planned to setup a base of fire from the white building on the far left, while the three middle squads advanced along the right flank, taking the tan building and the white building to the left. This would not go well, despite my attempts to follow the plan despite actual battlefield conditions. 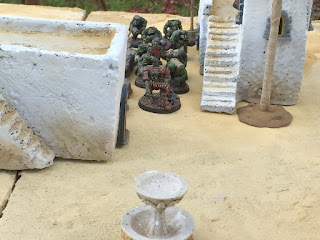 Orks setup primary in the central alley. Their rules favored assaults, making it virtually impossible for the DKoK to win an assault, or survive a 12" SMG volley. Had I been facing Russians, I may have remembered this, however as we were playing Bolt 40k, I left tactics at the door, and blindly moved my forced into one giant kill zone. 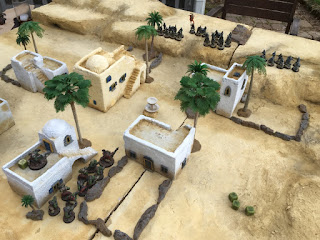 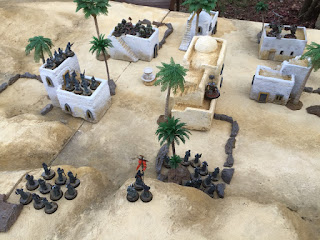 Lieutenant Court Martial, CM from this point on, ordered his squads to advance. First squad took the left building as planned. Third squad advanced into the courtyard of the yellow building. CM failed to appreciate how difficult it would be for the squad to climb down from the cliff face. 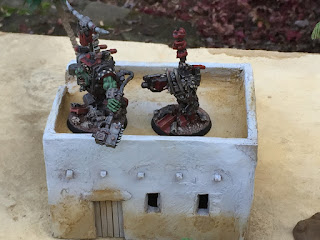 Loud grunting was heard on the left flank. It sounded dangerous. 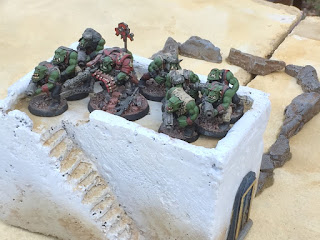 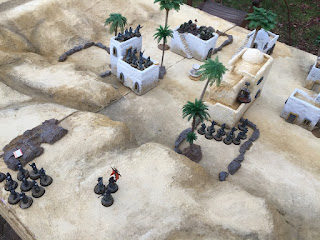 Second squad took some fire, and when ordered to advance in support of third squad, they foobar'd their moral check and retreated. LT CM was surprised, however this would not deter him from following his plan. 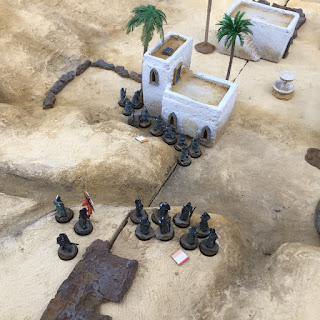 With some coaxing the second squad moved back into position. 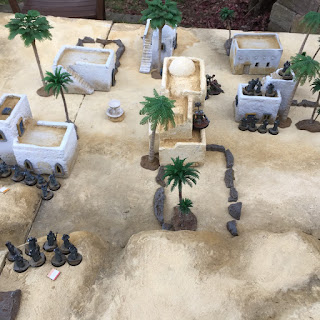 Third squad continued their advance into the far right building. LT CM assured them that they would be supported by second squad. 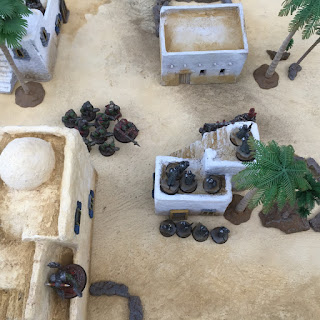 The cunning of the Orks on display. The Ork in Charge (OiC) pulled in one of his squads and assaulted the building brutally killing all of the occupants. 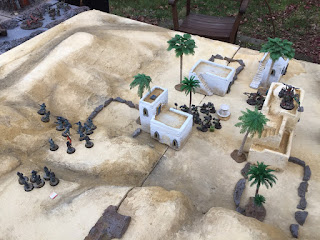 LT CM realized his mistake, and immediately ordered all forces to withdrawal. This fight could not be won in the city where close range ork assault weapons ruled the day. Remnants of first and second squad were to pull back to the edge of the embankment and fire from cover. 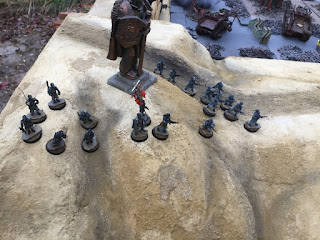 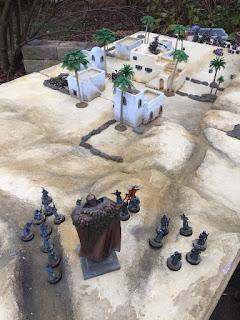 LT CM decided that prayer might help, and ordered his squads to pray to the space marine statue for deliverance. 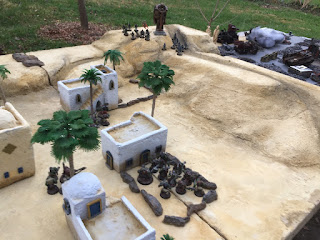 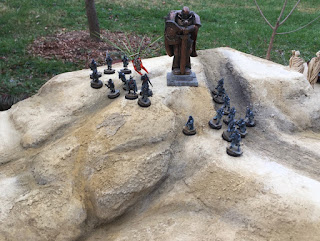 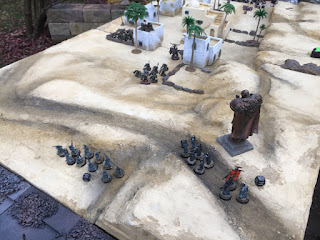 Deliverance came in the form of a hail of bullets from the Ork marauders. 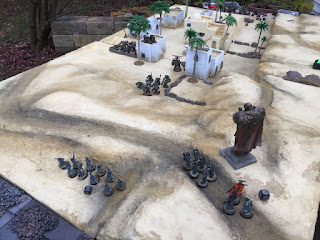 Cleverly, LT CM positioned his command squad as far back as possible from the front lines. 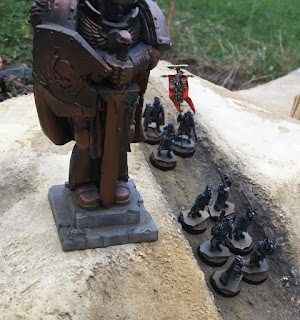 While my maneuvering was terrible in the game, I think the mash-up worked pretty well. Steve even came up with a whole campaign for us to play. Rather than rebalance the rules, we are going to let the game play out with all imbalances in place. That will allow me to reorganize my forces into units capable of dealing with the Ork invasion. More of a story will evolve over time. The Orks want territory and slaves. The DKoK want to regroup until they can come up with some workable strategies. We plan to play a variety of different games of different sizes, highlighting various aspects of the Ork invasion. 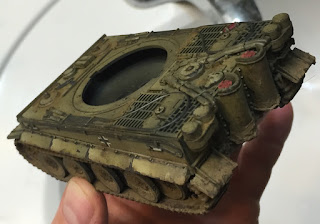 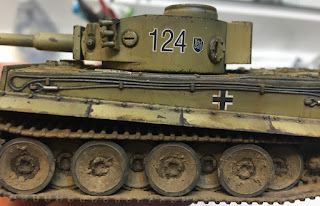 I found some plaster and was able to put a few layers of both dry and wet looking mud on the tiger. The mud obliterated the nicely painted road wheels, but it did let me hide the terrible tracks that came with this model. I am really please with how it came out though, since it adds a level of realism that will look good on my kursk force.

I am going to experiment more with mud. It might be my new favorite thing since I discovered streaking grime for vehicles!
Posted by John Stiening at 8:58 PM 4 comments: 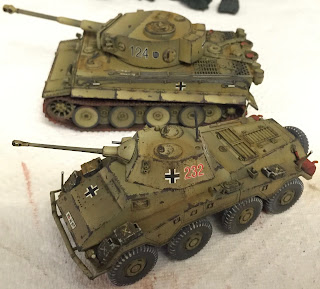 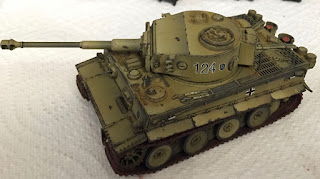 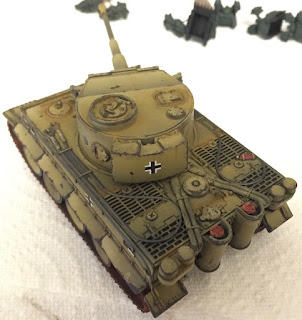 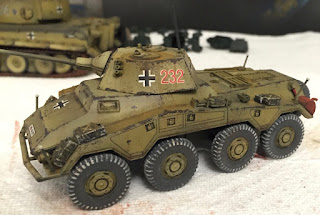 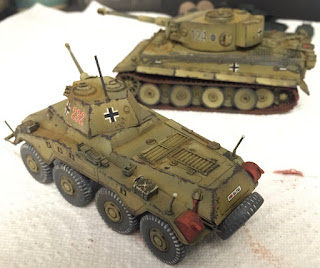 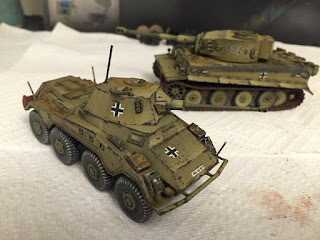 I've committed to changing my ww2 german paint recipe, and have nearly completed these two vehicles for my upgraded motor pool. The change drops the intensity of the yellow edge highlight, and moves all of the paints over to the Tamiya line of airbrush paints. There is a lot to be said for the vallejo paints, but I really like the color pallet provided by Tamiya. I think this is the base color scheme for the 1/72 scale forces I purchased for smaller scale Bolt Action games.

Now these vehicles are not complete. They will be receiving either mud or dirt along the lower edges of the chases. I was hoping to have added the mud by now, but the mess that is my hobby area, has made it difficult to find all of the ingredients necessary. These aren't my highest quality vehicles, but sometimes I just need to paint something without worrying too much.

In other news, I bought an SLA 3D printer. I plan to manufacture parts needed for a special build. I can't say much about it now, but over the next 6 months I'll post bits and pieces of it. The only hint I'll give, is that I have to model a 60s era radar mast.