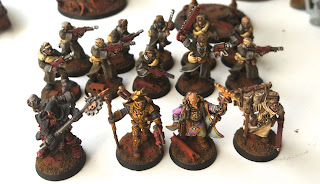 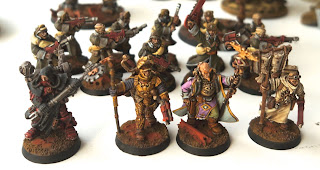 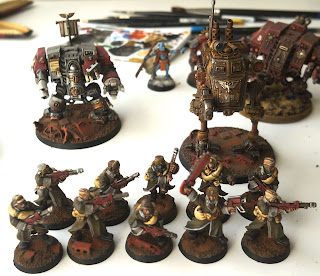 I have a lot of miniatures. This is great. This is not a problem. I do not have a lot of space for my minis. This has become one. For some time I have had a load of older armies on display in my office that really are not up to my current painting or basing standard. They are nostalgic, but they also offer a sort of in-house store, where I grab minis I want to re-paint and give them the simple green treatment. Recently I've been painting a boat load of ultramarines.  Now that I have a legal army, my ultras have graduated to the display cabinets. Enter ultras, exit guard. While packing up my Imperial guard for storage, I couldn't resist pulling a few minis to keep in my cabinets. These are my favorites. I don't know why, since I have painted much better models than these, but for some reason these keep my attention. The problem was the bases.

Solution:
1) Mix a couple of scoops of secret weapon green earth weathering powder with water, and thinner.
2) flood each old style base with the new mixture.
3) Add forgeworld rust to all of the pipes, debris, and even any old spot that could use some color
4) Rim base with black.
5) Wonder if I should give my whole guard army this treatment. (the dread base was a test!)

So now I have to make room for a tiny guard contingent. Exit tau. 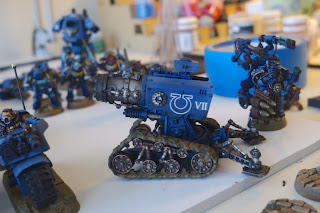 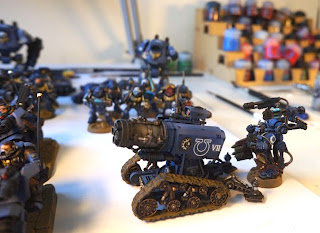 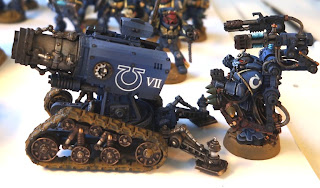 The thunderfire cannon is complete. I am looking forward to using this in a game just to see what it can do. I've never seen one of these fielded, or even painted in person. That leads me to my next never seen unit. I think I need to paint up a whirlwind. I had one painted years ago for my BA, but a bath in simple green and the tank is ready to wear new colors.

Sorry for not using the Photo Booth for these shots. I wanted to paint, not setup the contraption. I think I need a dedicated space where the booth can just sit, otherwise I will just keep ignoring it. 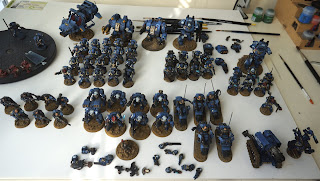 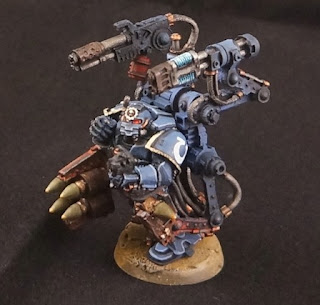 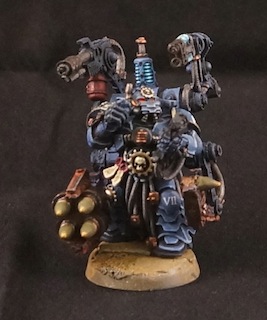 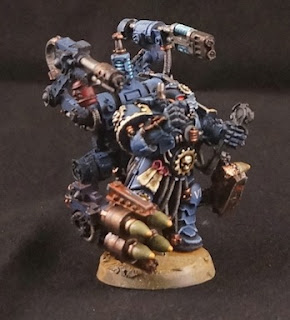 I finished this guy up in between episodes of Breaking Bad this evening. The casting was so terrible on the shells and manipulator arms that I tried to use heavy washes and rust pigments to cover up the detail loss. I am not sure it worked, but I think the guy is kind of cool. the weapons up top have spongy feel, and a really fluffy surface. I used heavy doses of paint on them hoping it would fill in all the little holes. No such luck.

For photos I tried was using a photo booth instead of just snapping shots ad hoc as usual. I'll have to experiment more with it since it will clearly enable better photos going forward. The light was a little harsh this time around, but once I get the hang of it I hope to be producing better photos.
Posted by John Stiening at 7:44 PM 4 comments:

On My Painting Table 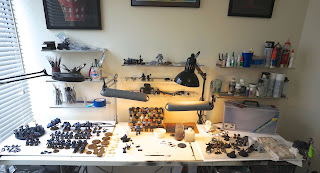 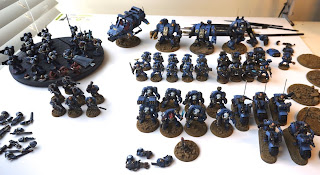 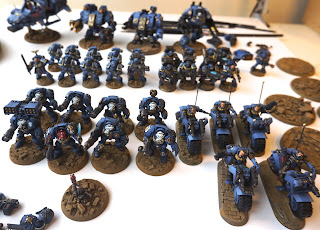 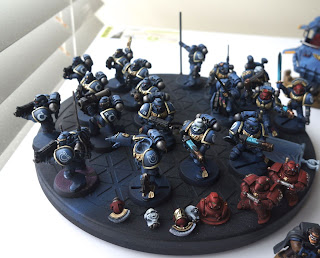 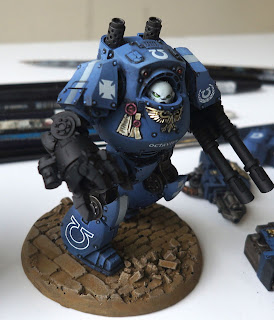 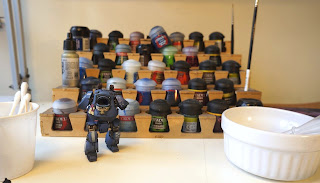 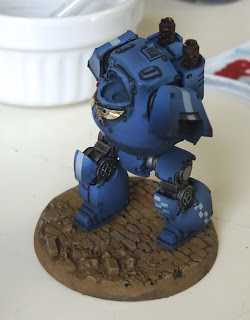 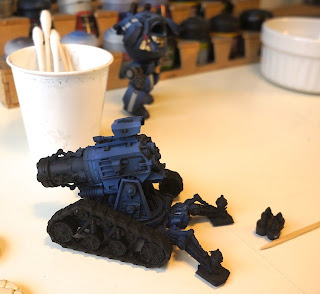 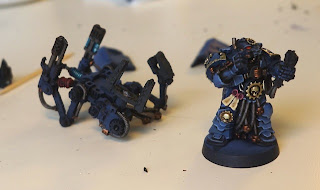 After letting my painting area devolve into a pit of despair, I finally decided to clean everything of. Gone are my magnetic paint pot wall boards, and in are acrylic shelving from the Container Store. Cleaning was long overdue, and my new workspace has already kick started my enthusiasm for modeling

One of my goals in painting my Ultramarines was to paint every entry that I had not painted before. This includes the kinds of units that list builders usually ignore. Last night I started on one that was new to me personally, but which has appeared in some competition lists. Enter the Thunderfire cannon! Exit casting quality. This is the worst finecast model I have tried to paint so far. (plenty have been returned) Sheer stubbornness lead me to try to paint up this guy despite the horrible cast. In the end the mini will sit nicely in the background lobbing shells at unsuspecting guardsmen or other hoard armies. I am even enjoying painting the guy, even though every other cable abruptly ends. There must be something to the freedom of painting when the quality of the mini removes all final product expectations. On the other hand, this guy was supposed to come with me to NOVA this year and the model looks like an amateur cast. I don't really want two of these things, but have I really painted it yet if the cast is so bad half the cabling details are missing?


Another really cool thing stole my attention partway through cleaning. NOVA is going to allow FW models at the event this year.

Can I get an amen!

This is a great change, and long overdue in my book. Half the fun of going to an event like NOVA is seeing all of the beautifully painted armies. This year we'll undoubtedly see great FW models as well. Three cheers for diversity. My Contemptors might even make a showing, though I might have to spend all my points on a Storm Eagle, Casteus Assault Ram, and Storm Talon instead. I just think that would look so cool. Especially if I could work in an allied force with a Storm Raven. Sure there would barely be enough troops. Sure it is not a competitive list. But how cool would it be to play a game where space marines ride into war air cavalry style.

So after this long pause to take these photos and write this post. What should I paint during the last half of the afternoon? 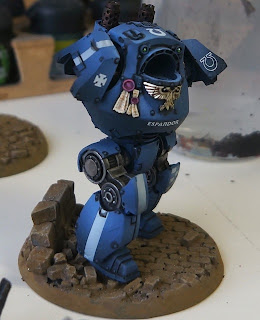