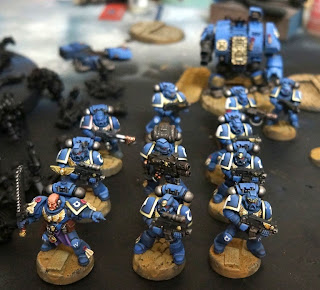 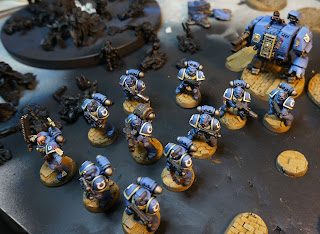 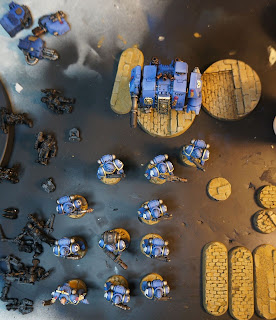 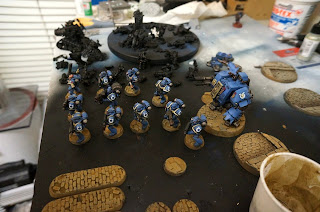 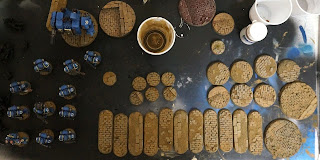 After a spell of uncertainty with regards to my painting, I am really happy with how my Ultramarines are turning out. As some know, I've been planning on this Ultramarines force for several years now, which has probably added a great deal of unnecessary pressure. All it took was a wash of weathering powders on the original bases, and I am excited again. I am especially excited to paint up some scout bikers to go on those biker bases in the last photo. (I know I need to actually finish painting the dread! first!)

This will be my first full SM force since my Blood Angels, and ti think it will play really differently with all of the weird SM codes goodies I've purchased. My rule for purchasing for this this army was to buy everything I have never painted and work it into the force. That means I have a thunderfire cannon, ls storm, scout bikers, and whatever the chunky dreadnought is on deck.

Forgeworld Weathering Powders On Resin Base

I was going to wait until I got back from LA, but since I had a few photos of my bases coated with fw weathering powders I thought I should share. I think I am all set with these for my ultramarines. I am still deciding between two colors, but these will do nicely with my tallarn guardsmen and black Templars.

- Posted using BlogPress from my iPhone 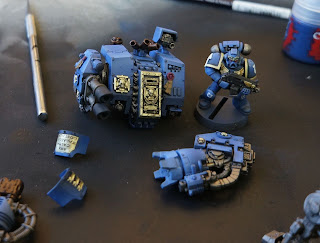 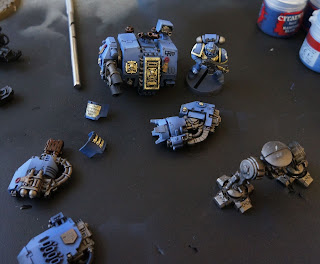 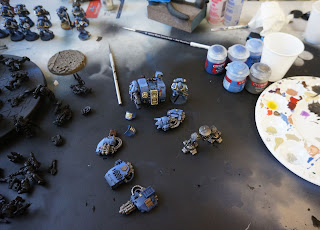 My first Ultramarines dreadnought is finally taking shape! I've had this mini for years, but as AoBR came and went, this dread lived in a built and primed but not painted condition. Back when I built this thing, my skills were far worse than they are now, so I carefully broke the model apart before I started painting.

In the background you can see my tac squad, with transfers all affixed. They'll stay unbased along with the drew until I figure out what to do.

I am heading off to LA for thanksgiving tomorrow, so this guy will have to sit partially completed until next week. 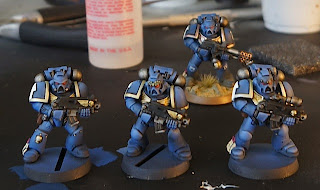 I received a lot of good advice on my test model which really helped me tweak my painting into something I liked. It was amazing how big a difference changing the pouches to brown, adding deeper reds, and very targeted purple washes helped. I am really grateful for the advice provided by the community.

I'd love to keep the base dusty, but I think a mars like base would add a lot of interest to the models. I painted up an Ultramarine years ago that I put on a mars-esque base, and while the mini was over-weathered, the red-blue contrast was great.  For now the models will remain un-based. I just don't know what to do with the LR Promethes, 2 predators, 5 rhinos, 1 razorback, and 1 vindicator I've already painted. (the aircraft are dust free)

Just to make things exciting, rather than use the recipe from my test mini, I changed it up incorporating some of the new GW paints. I also decided to paint up an entire squad. I usually batch paint, so any method needs to be easy from  that perspective. So with a squad made up of previously painted rag-tag models, I changed my blue formula to:


I chose Kantor blue as the base because it was darker and would make more interesting shadows. Basically it added a little bit of purple tint the model.

So a squad with a meltagun and a multi-melts. I had a lot of meltaguns so I added one to the unit. The multi-melta was added because I had a partially painted one from my BA force. I've never used one as part of a tac squad, but I think it could be kind of fun.  I purchased two plasma cannons and three heavy bolters from one of those bits sites, so I'll eventually have a few options. 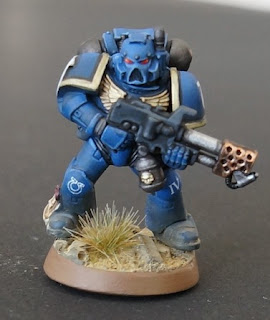 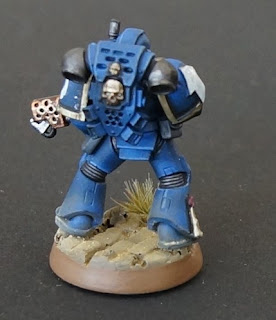 I've now painted my third Ultramarine! I used a Grex airbrush that I picked up at NOVA for most of this guy. As a test model this guy got to experience just about every technique there is. Total painting time including basing is under an hour, so I expect a full squad would not be that bad to paint. The problem is that the model is not really speaking to me. It could be that using AoBR models as test models is so overdone now that it colors my view, but I think there is something wrong with the color scheme.

I've got a whole squad stripped of paint ready as a test squad. I may go ahead with it, or I may do a few more test models. Any advice is appreciated!