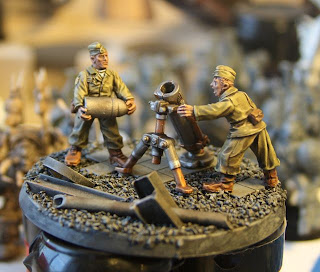 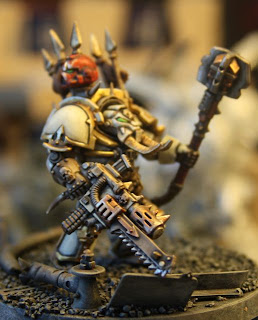 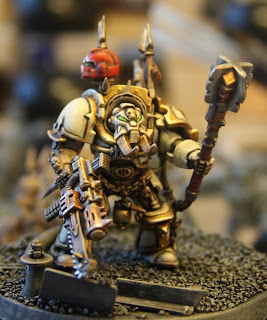 I had a little problem with the white primer, but plowed ahead anyway. I suppose I will finish off the other two squad members and simple green them at some point in the future if I run out of other stuff to paint. I guess today was one of those days where I should have just stopped painting when things started to go wrong! From a distance the mini looks ok, but the surface is covered in earthquake like primer cracks, and the detail is muted due to excess primer. Maybe they will look better when they are properly based and in a squad.
*edit. I just added a shot of some recently painted Imperial Guard. These guys look like old school Russian soldiers. I love these old minis, though I only have two of them. I decided to make them a weapons team instead of a basilisk crew because they just looked too small as vehicle crew. They are on my bog standard ruined city basing, though it needs a little more orange wash to bring out the rust.
Posted by John Stiening at 12:51 PM