Thanks to the staff of Springfield GW

I really enjoyed the Springfield, VA GW store while it was around. If it had not been for that store I would have probably not gotten back into miniature painting in the first place. GW Springfield had a dedicated group of regulars, and great staff, who welcomed you in, regardless of how long it had been since your last visit. It was a really great environment, filled with hobbyiests. The store was great when Bing was the mgr, and when it transitioned to Bill.

I did not get the chance to wish you guys well on the store's last day, so here it is belatedly. Kudos to the GW Springfield store staff! Best of luck on whatever follows for you.

So where do people hang out now? A void exists.... 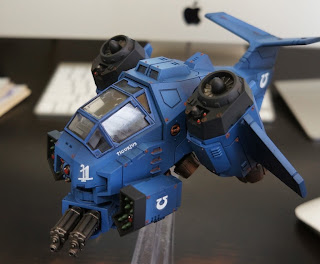 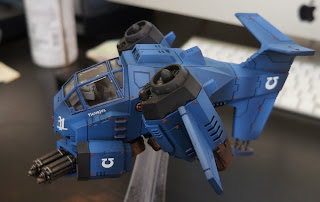 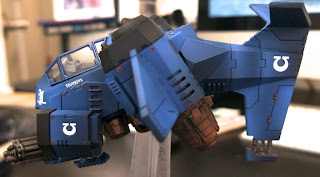 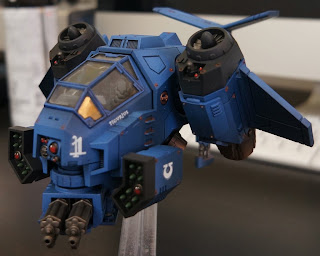 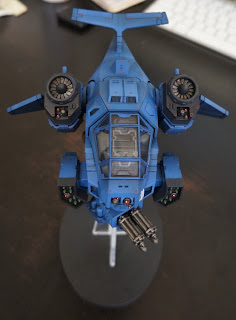 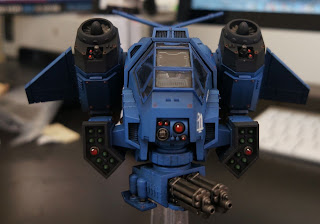 I've been traveling, so I've only made a little bit of process. Now that transfers, rivet dirt/rust, and gems have been added it is time to sponge on the battle damage. I have been tempted to dust the lower portion of the storm talon with graveyard earth, in order to make it blend in with my tanks, but I am just not sure how much dust a vtol like this would pick up and carry around with it.

Overall, the more I work with the model the more I like it. I don't feel the need to convert it at all.
Posted by John Stiening at 11:12 AM 2 comments: 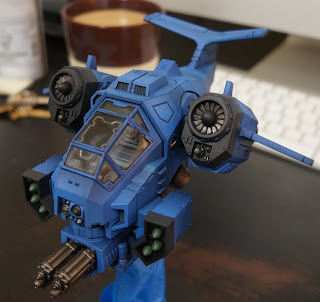 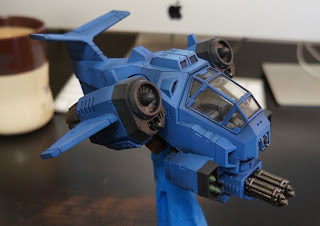 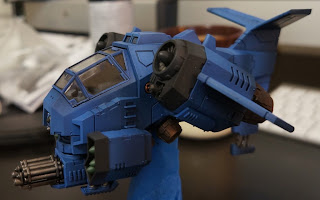 On my last post I asked how to configure my Stormtalons. I got some really good advice from gamers almost certainly better than I. The idea of have Stomtalons escort bikes and Land Speeder Storms, sounds like the army I have been trying to figure out how to build but have not been able to make all of the pieces work. The ST brings the needed firepower to make the combined force usable! The idea of two storm talons escorting a full sized bike squad with attached Kosoro, and another storm talon escorting a land speeder storm with 5 scouts on board sound really fun to play.  Add in a drop pod, dread nought, and that thunder fire cannon I have always wanted, and now I have list full of models never seen on the table top!

Back to the model.

I am painting both sets of missiles, even though the image only shows one of them here. I wanted a color test, so I pulled the missiles requiring the least effort to paint. All of the sensors will be red/orange, so the the idea was to use green to add a little bit of discord. I'll have to do a second pass with the base color, and then a lighter color at the tip.

The canopy was the hardest thing for me to paint on this model. (ignore the flaws to the priming of the engine cowlings...that happens to everyone now and then!) One of the problems with the cowling for me is being able to see where to paint. The lines are not distinct, and the thing is clear. Half way through the process, I stopped what I was doing and got out nun oil, and used the wash to settle in the recesses and show me the raised areas. In areas where the wash got too far on to the canopy I just used a brush to sort of erase it away. I'll definitely use this technique on the other two canopies. Trying to eyeball it without the wash is just aggravating. 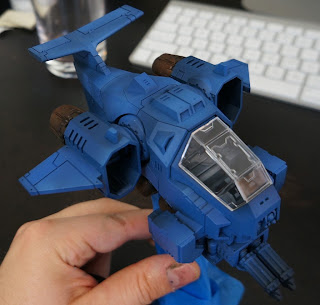 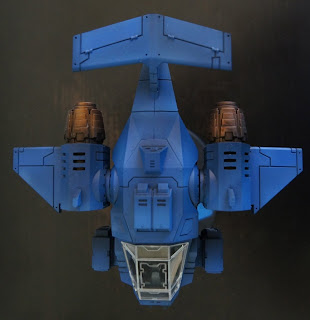 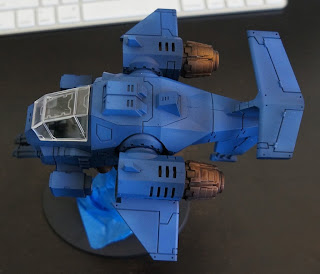 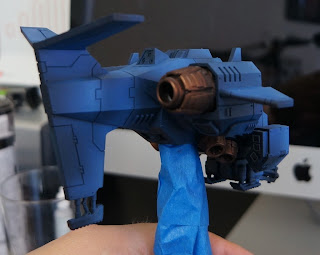 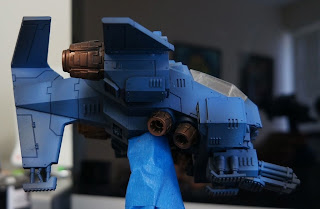 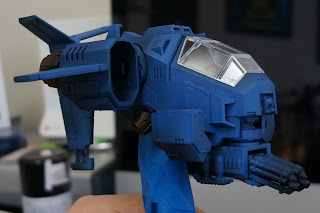 I purchased three of the Stormtalon kits to ride shotgun with my Casisus Assault Ram.  Like most kits, the first one you ever build is the only time it is difficult.


So what configuration makes the most sense with these guys? I am building this on up to be either of the missile options. I was thinking of making one of the other ones into a las cannon version. 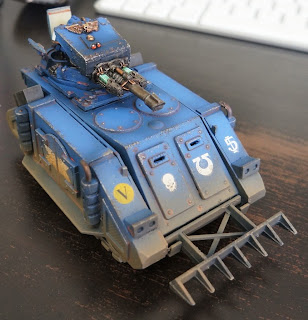 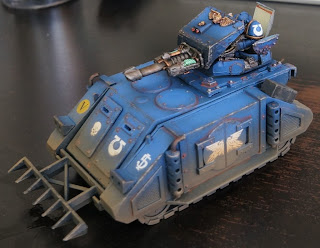 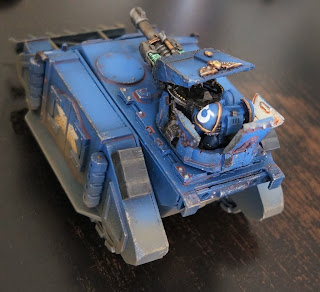 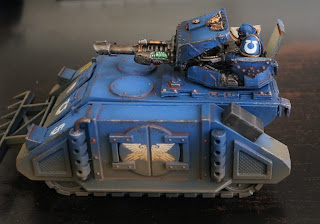 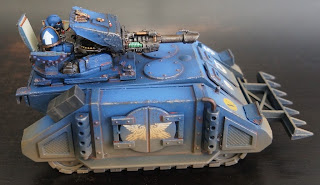 This is the completed OOP Razorback.  Even with the final paint in place I think the quality of the underlying model is too poor for Armies on parade. I love the look of the model, but the closer you get, the more flaws stand out.  I tried dusting the model before I had sprayed the decals with dull coat. That was a mistake. I suppose that is one of the benefits of working with a model destined for a life somewhere else. It is easier to take risks. It is the first OOP razorback I've ever painted, so it was fun.

So what do you think? If I ebay this thing, and mention the replacement parts, and the extraordinary poor construction, do you think the buyer would be upset? I think the paint job is nice, but if I were buying this for myself,  my goal would be to strip it and repaint it. I'd like to save the next collector the hell which is this particular lemon. I soaked this thing in simple green for two weeks in an attempt to remove the paint and glue. It turned out that paint and glue was holding the plastic together, not the other way around!

Is this ebay-able?
Posted by John Stiening at 6:49 AM 5 comments: 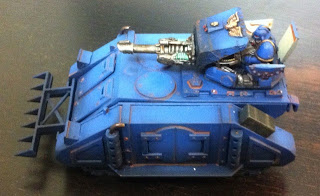 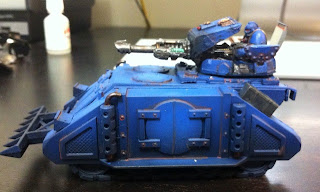 I took a break from the thunderhawk project to work on an old razorback rehab project. When I purchased this online it looked pretty good. When I received it in the mail....er not so much. This thing is full of glommed glue, replacement cast parts, and so much glue that I was afraid to do too much to it for fear of dissolving the thing.

Remember the warning Ron gave me out rehabbing old tanks? He tried to impart just how difficult it would be if my luck run out with my purchases and I ended up with a real dog.

This razorback is a dog. Now having said that, I think I've managed to paint away a lot of the flaws. I still have transfers, weathering, and dust to apply, but I think this tank could look really good on someone else's shelf.

Yep, I think I am going to ebay this guy. My Ultramarine project is meant for Armies on Parade, so I can't have this creaky old part rebuild tank part of it. It looks great from two feet away, not two inches. Could someone tell me what the ebay experience was like for a first time seller?
Posted by John Stiening at 6:41 PM 3 comments: