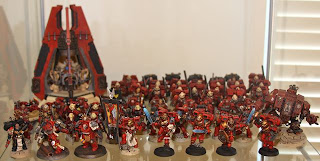 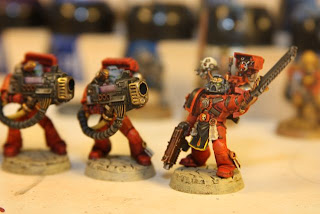 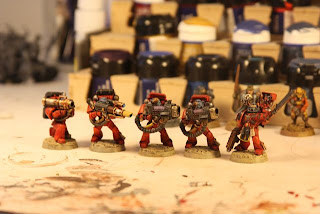 I've had 4 partially painted devastators for a long time. I originally bought them for my Iron Scythes, and then they got passed around from army to army until they received their blood red paint job...last year. This is the problem with starting and not finishing projects. These guys got a paint job when I was relearning painting from the ground up, but since I started them back then, I had to deal with that fact today. Now I have a unit that has all kinds of painting styles and does not benefit from either my new found love for layering and blending or my growing hatred for mold lines and bad priming. In a hobby like this it is hard to finish units when painting momentum is lost. At least they are done, and while not the best looking figures in the army, they at least do not stand out as the mostly primer unit they were.
So, does anyone field squads like this. I feel like I have to try them out at least once now that they have a few dozen coats a paint on them. What will one las cannon, two plasma cannons, and one missile launcher do to another unit. Can I toss this in with my baal and unpainted land raider? It certainly looks like a fun unit for the shooting phase!
Posted by John Stiening at 1:48 PM