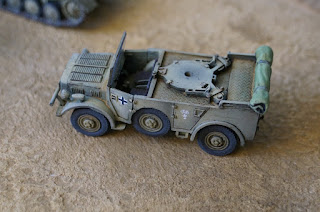 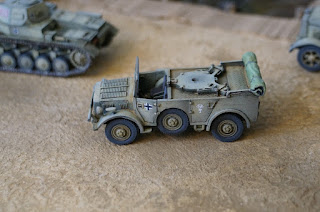 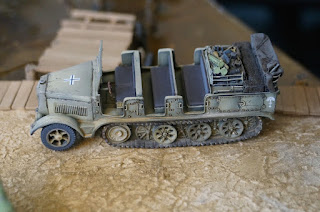 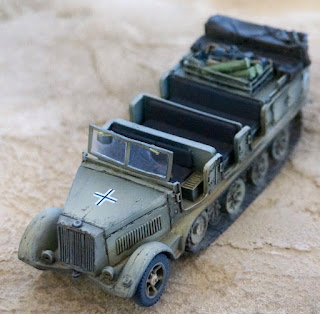 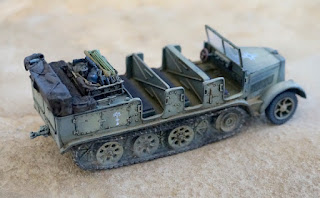 I've had these two German Desert Afrika Korps vehicles in my painting queue for quite some time, and decided to dust them off and get them painted yesterday. The open topped bus looking thing is an Sd.Kfz. 7 half-track. I've been waiting to try dust effects on a windscreen for a long time, and finally had the opportunity with this model. Unfortunately the windshield wipers on the model are so small that they would be almost useless. Despite this I gave it a shot. The recipe is simple. Mask off the area that should be clean, and just apply matte varnish to the area you want to appear dusty. Simple and fun.

The Horch anti-aircraft truck currently lacks a turret, but so far it looks like it might be the stand out model of the pair.

Neither of these models will figure in our huge Sunday game, but I am happy to add them to the DAK stable for future use.

What's On The Painting Table

Sometimes what's on the painting table is amusing. I have nearly finished Sons of Orar for the NOVA Charitable Foundation army raffle, Palm trees for our big Bolt Action game, and cows. Clearly I don't know how to paint cows, but eventually they will look good enough to use in one of our Normandy games. 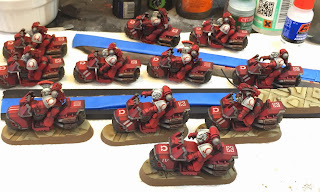 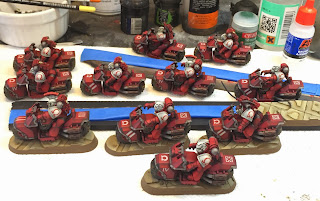 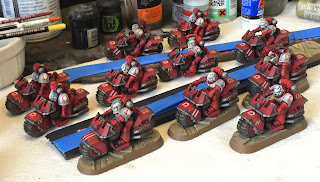 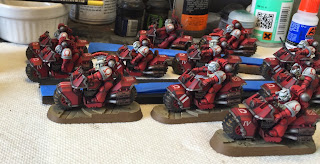 Once again, some zombie shots of the Sons of Orar biker squads part of the NOVA Open Charitable Foundation army raffle. (once the whole force is painted Dave Taylor will take army shots and direct people towards ticket sales) The handle bars are drying right now, but once they are ready, I'll be able to mount the marines on their bikes. I'll have to dust up the bikes first, but that is a quick fun 2 minute task prior to gluing the legs on.
Posted by John Stiening at 9:21 AM 2 comments: 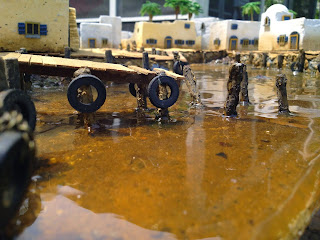 So Steve and I have been building a table. He is going to have loads of table building posts over on his blog. Once we are both cleared to post more photos, you'll find detailed construction info over there. Everything but the palm trees are scratch built. We used loads and loads of plaster, as well as resin for casting building decorations and tires.

So why build a massive North African port town? Well, we've been focussed on narrative play for a while, and have been slowly developing terrain to support it. This table is one of our big leaps. I wish I could show you more of it, but that will have to wait till after our big game. Steve and I are GMs for the two sides, and I don't want to spoil some of the surprises for the players.

One of the benefits of narrative play is grounding the game/units with realistic objectives. For example each player will have specific objectives to fulfill as part of their team. There are also battalion level objectives. Players will know what their squads are supposed to achieve, and will have an overall understanding of what the CO desires. To achieve this realism, Steve, as head GM, is adapting the rules to fit the operation better. Having played two test games now, I am really excited to see how this pans out.

Now, onto the important stuff. As the GM/CO for the South African forces, my officers might be wondering what Scotch to pair with the battle. This is the only important question to ask before game day. There might be other questions once the player packet goes out, but let's focus on the right priorities here. I am going to suggest peaty salty scotches for units involved in fighting closest to the port. For those fighting further inland, I recommend they stick to distillers known for smokey and salty notes.