DKOK Army With Display Board 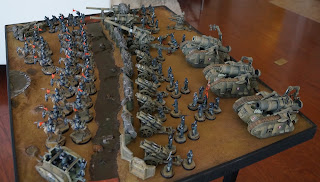 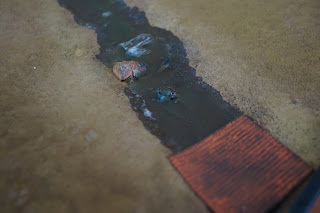 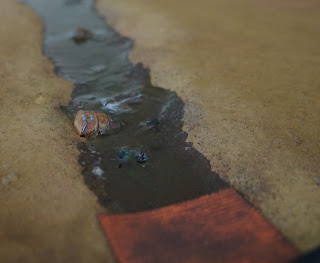 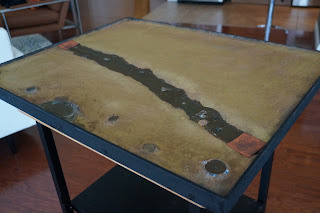 With an army this large I had to keep the display board relatively flat, and simple. I did want a little bling though, so I followed my earlier sketch and added a river of gunk. It should have been a tiny creek of gunk, but I over poured the water effects, so this is what I have. The real novelty of the board is not something you can see, but something you can feel. The board is extremely light. I made it out of pink foam, but then covered it in merlin's magic, which is a type of hard plaster. Another new feature is a set of guide rails under the board that keep it from slipping off of the stand.

All of the painting on the board was done with pigments. It wasn't even primed. I won a box of SWM pigments last year, and I have been working my way through them at a furious rate. They are simply awesome. The water effects were a hot pour, which meant a lot of my plastic details melted, and a few of of the wooden debris caught fire. There is some cracking around the craters, but I don't think it is bad enough to warrant fixing. Fingers crossed for the car ride over to NOVA. That is when the real damage happens.

let me know if anyone wants to see WIP shots of the board.

Posted by John Stiening at 4:39 PM