Death Korps Full Army With Display Board Mock Up 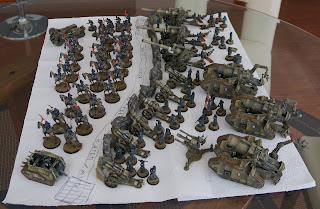 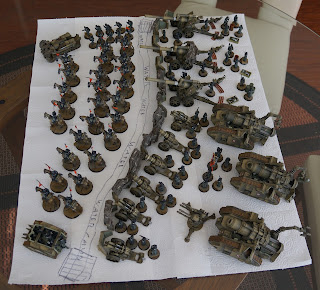 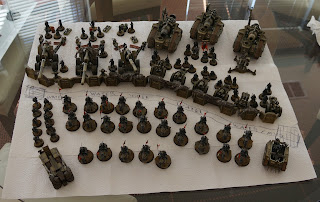 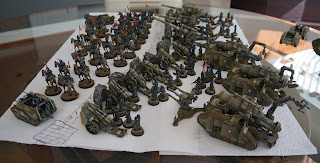 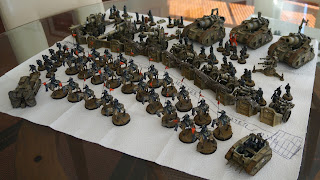 With the aegis line and quad gun done, it is time to mock up what the display board could be. My original idea was to have a ruined european looking village in the background with the guns emplaced within it. However, with this many models, I think I am going to have to go with a less is more approach. One sharpe and a paper towel template later, and I am happy with the result. The board is bifurcated by a small stream down the center, with the Aegis line behind it, and soon to be build barbed wire sections in front of it. I plan to add two rusty metal bridges on each end of the stream. The front of the board hosts my assault and fast response groups.

My deployment plan is for the Hades drill and grenadier centaur to hold back, while the Death Riders sally forth under heavy artillery support. In the background my HQ unit will issues orders and operate the quad air defense gun. In the far back of the board, the Bombards will blast away at other player's tables. You read that right. I intend to fire those 60 foot range weapons at other player's tables. If one of my teammates calls in fire support I will fire at their opponent. If in a doubles game my team member happens to be outside my minimum range, and our opponents agree to a cessation of hostilities, then I will fire upon my own team if they are showing any signs of fleeing Earth.

The NOVA Open narrative event is mean to bring players together and provide story. My goal is to help players have a good time. As an evolving story, the narrative event has reach the point where the alien "Virtue" who had come to wipe humanity out, and the UN defense forces, have essentially fled Earth. Finding humanity more evolved than they had expected, and their own leaders more evil, the Virtue have fragmented. In a final act of evil, a Virtue battle cruiser was crashed into the earth, causing nuclear winter like effects. Victory is bitter for humanity. U.N. forces have largely abandoned earth and fled into deep space. It is in this context that our games will be played. My force, the Death Korps of Peoria Illinois, have steadfastly refused to abandon Earth. With gas masks and artillery all will be made right. The Death Korps are patient, and their guns have a very long reach.

Posted by John Stiening at 8:13 AM