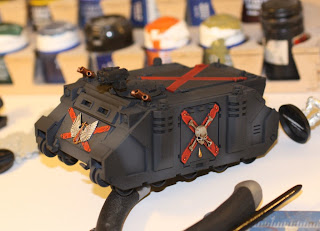 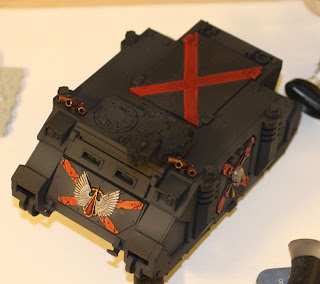 My advance order from GW did not come today, so lacking anything new to paint I started on some original death company miniatures and the Rhino pictured here. I am really not pleased with the top hatch, so it gets replaced tomorrow. I think the right procedureis to lay down the X in red first and then paint the black over it. That way it is much easier to mask off the X rather than try to tape around it.
Other steps for the rhino
Since my codex has not arrived, I was not entirely sure how to equip the original death company models. In the end I decided on bolt pistols and chainswords for 6 of them and 1 guy with a BP and a powersword. I treated the minis to the same black/grey air brushing, which gives them a very smooth appearance.
Posted by John Stiening at 6:27 PM