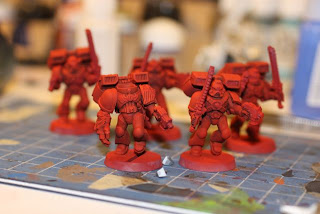 Just to get back into the groove of things, I built a sergeant using some sanguinary guard parts to add to a horribly glued pack of 4 salvage minis from a swap meet. I made the horrible mistake using Armory grey primer again, and managing to dull what detail was present on the minis after the original builder's glue had melted half of the detail!
So, with some rather chunky primer in place I tried out shading the unit using an air brush. My wife took one look at the orangish-red guys and said she preferred my painting style from two years ago! Despite the detail obfuscation I decided to press on and see what I could do. Overall I am actually kind of happy with these guys. They let me experiment with some new techniques and fail, and then try again without much worry. In the worst case these guys took a little over three hours from start to finish, so the painting time is not bad. A few heavy washes of baal red, and these guys are not quite so jarring as they were next to my old troops.
Posted by John Stiening at 8:05 PM