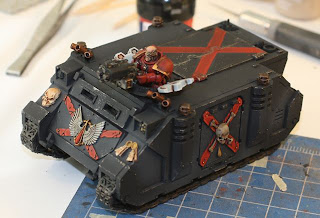 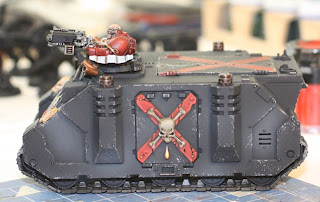 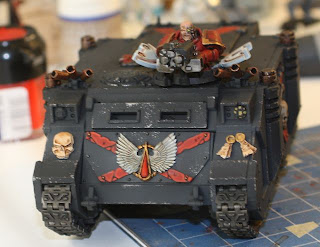 I decided last minute to add a gunner to the rhino. I guess I really haven't committed to changing the painting style of my blood angels yet. The gunner was paint in my now 2 year old method, which looks ok, but is a far cry from my cleaner style. The new codex pushes the BA as super detail oriented makes my old minimalist stuff look a little out of place. The rhino itself is in my new style, and since it is my only death company rhino so far the fact that it does not match my old tanks is not so bad. The kicker is going to be when I paint the new Baals and my Land Raider. I really want to go for a clean bright look and then sponge damage them.
I think the reason this is so hard is that that my original BA were the first new army I painted after my first go around with heart surgery. They were painted for fun, and with an eye towards getting some actual gaming in. The rules were easy for me to digest, the list building was easy, and I could play the game without having to remember too many special rules. It was a much simpler epoch. Of course, now I have a reason to build a vindicator, death company dread army!
So, back on target, the forge world powers, the dirt dusting, and the storm bolter have not been completed yet. I need to finish painting the headlights as well. I just forgot about them until I looked at the photo!
Posted by John Stiening at 7:12 AM