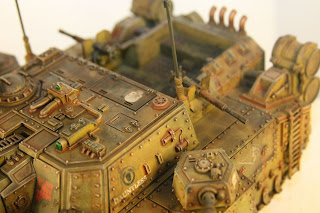 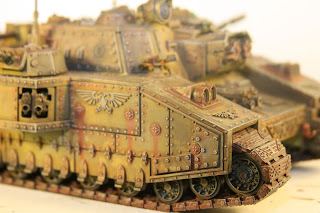 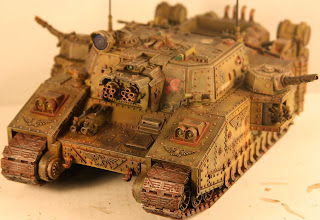 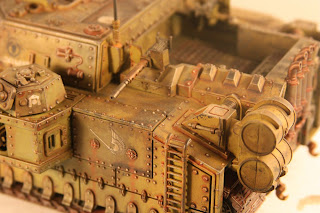 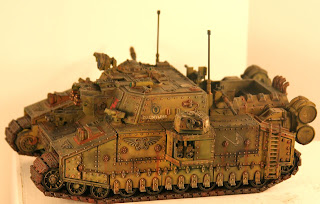 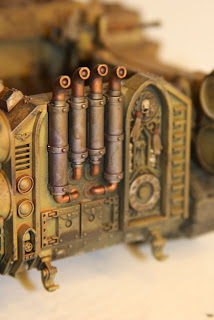 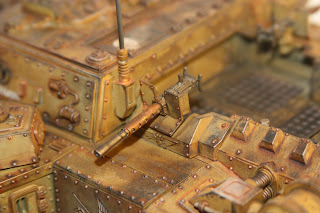 I just added the first layer of forgeworld powders to the shadowsword. So far I have added the rust colored powder as a wash to the tracks, around random bits of machinery, and as streaks from whatever those circular things are on the side skirts. To make the wash I mixed FG rust powder into a large amount of Tamiya X20A thinner. Once the thinner had evaporated I dry-brushed very light deheneb stone over the whole tank. I think my next step will be to use the ash colored powder as a dust around the tracks and the side skirts of the model.
I've been having trouble getting good shots of the tank, but I think you get the general idea. In the future I think I need to use more of a contract on the camouflage colors, so the heavy weathering has something to play off of. I've noticed that grey-blue tanks, look fantastic with rust colored patches. This guy is a bit monotone, but I am enjoying it again. That whole dull coat incident really burned out my painting desire for a while.
I wish I had reason to use this guy in a game. I've never played an apocalypse game, but think that might be my best chance. I don't have a gaming group here in DC, so I just rely on the GW springfield store. All this talk of narrative games has me itching to get involved in one. Imagine a strong narrative game where painting and modeling are part of the process. History could be added to each model as the game progressed. Units that had done well could have new battle damage, more weathering, battle honors etc.
Posted by John Stiening at 7:46 AM