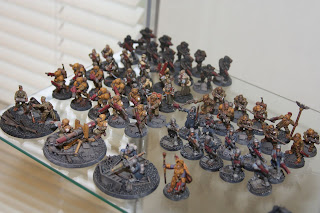 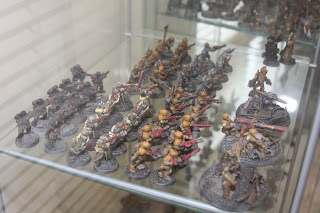 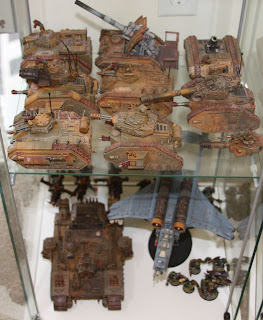 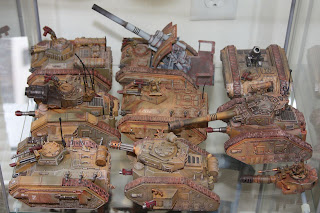 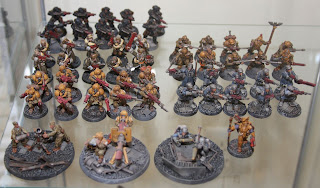 I've mentioned in previous posts that I am building a multi-regiment guard force. So far I have cadians, original guard, valhallans, armageddon steel legion, and storm troopers painted. I have Death Korps of Krieg, Kraskins, and a large voystroyan force yet to paint. When I started this project the idea was to be able to paint as many different units as I wanted, but retain a similar style so they all fit together. My grey knight force draws from these guys as well. I have about 50 voystroyans to paint, but other than that the largest element is the cadians so the other units play off of their primary colors. I think the force is coherent visually, even though they are all different models. Do other people build forces this way? It does seem a little scatter brained at first, but every time my steel legion guys take casualties it means something, since they are the only unit from their regiment in the army. Lord Solar is a unifying character since it would make sense for him to have all of these different forces acting as his body guard. The only element where I have not drawn from multiple regiments is with the tanks. I wanted the armored company to have a unified look. The only exception here is the valkrie, which I painted in Imperial Navy colors. So, am I succeeding, or is cohesion just a painters wish fullfilment?
Happy thanksgiving
Posted by John Stiening at 8:50 AM