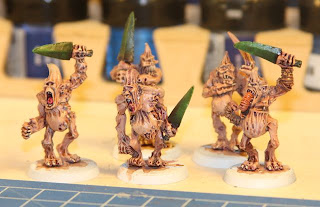 I have based my Imperial Guard Vets and am not totally out of good bases. The base production line I setup a year ago probably spurred me on t paint more because I did not have to worry about the last finishing part of the model. There is one step that is not complete for these guys and a bunch of the blood angels I have recently done. Transfers. The thing about transfers is that they add so much visual look, but they require a matte coat of purity seal at the end, both to hold them on, and to remove the gloss finish they impart. My purity seal appears to leave a gloss coat. Last week I tried the new can out on one of my chimera's and I assumed it was the weathering powders that had interfered with the seal. However, having just sealed a batch of Plague Bringers. All this talk of Nurgle led me to order some from GW--the even arrived in two days! As you can see from the photo, the purity seal added a slight gloss to the miniatures, which ruins their appearance. Most of the shading is now lost. Should I just buy another can and try again? What is it that causes the seal to gloss up like this? Am I using too much purity seal? I might have to go on a purity seal hiatus, since everything I spray ends up frosted or shiny!
Posted by John Stiening at 8:10 AM