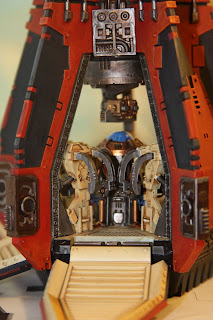 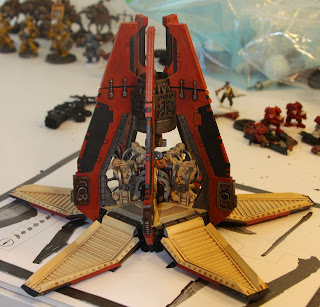 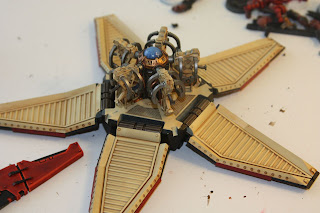 I finally dusted off the drop pod and sat down to put the thing together and paint it. I am still having a bear with red. For some reason I cannot duplicate the red I painted most of my army with. I've seen smooth blended red, and the battle worn red of my early days no longer holds me. I want my terminators to look like red rock stars.
The drop pod looks kind of cool now, but was not as cool as building a tank. There is something about having to paint all the parts individually that does not give me the same satisfaction as mostly building a kit and then painting it. The pod has touch up work, a few more bits, and some washes, and it will join the ranks of my BA.
So, does anyone just field one? Can I use a single drop pod? I was thinking of just putting my furioso dreadnought in it and calling it a day, but I have not ready any reports of single drop pod use. I suppose it could be used as a distraction while my jump packs and rhinos surge forward. If you had the choice of a furioso in your backfield, or death company jumping forward front and center, where would you fire?
Posted by John Stiening at 2:07 PM