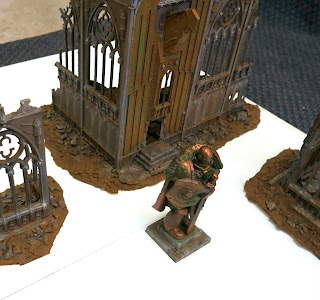 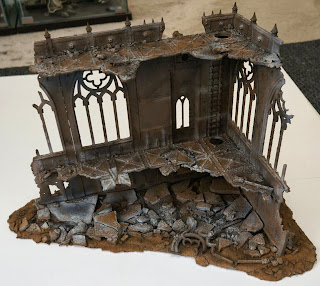 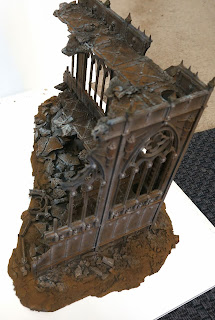 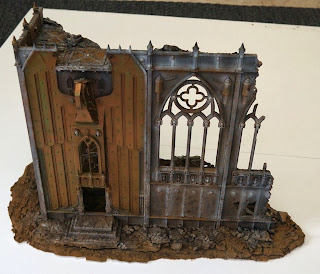 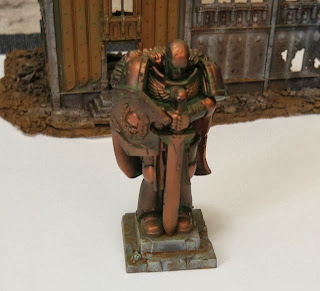 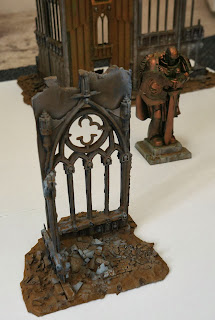 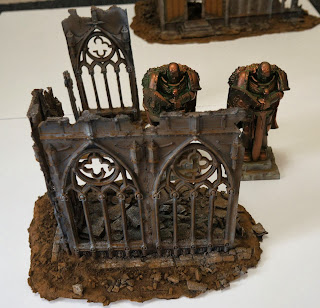 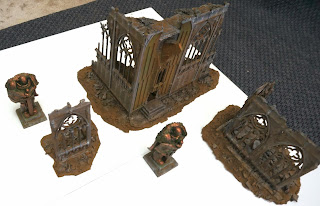 I was stuck out here during thanksgiving in order to support my companies' systems, so while my wife enjoyed Los Angeles, I got to get some terrain built and painted. I think she might be pleased to find out she avoided a lot of mess. The sheer amount of mess painting and weathering created cannot be understated. It is always kind of fun when people see our main living room with wrap around windows and mid century modern decore, to then see my office, with paint splattered floors, miniatures, air compressors,  and half finished projects everywhere. Everyone needs a bat cave right?

I learned quite a bit building these first pieces of terrain. Some of the rubble dissolved after several applications of diluted white glue, which only became clear when the first lick of paint went on. I think buildings look ok, but I liked them a lot more during earlier stages. Too much of the stone work I carefully laid out during construction got obscured by sand and rubble. I may use this to my advantage on other buildings, since it will cut down on unnecessary detailing.

So, things I like: Statues. Quick, Easy, Awesome: QEA

I really like the space marine statue. I won a painting competition a while ago at the GW Springfield store and received one of the marine statues as a trophy. I feel kind of bad repainting it, but I loved the way the first one came out and decided I really had to have two of them.  I am looking for things that look like candles, so I can put offerings all around their feet. I think it might be cool to have notes, letters, and posters pasted all around their feet. It would also make it look like some people survived the bombardment. Otherwise the city will look completely deserted.

I've got a few more buildings to build and paint, and then I can break out my battle board and see about updating the painting on it.

Once I figure out how to remove my crashed thunderhawk from its display board and make it a movable piece of terrain I should have a good looking battlefield.
Posted by John Stiening at 6:52 AM