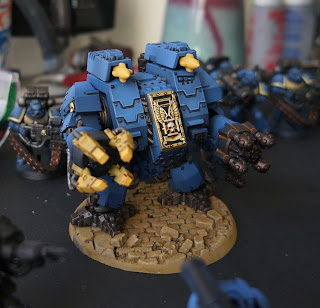 Another weird kit to cross off my list! I really like parts of the siege dread.  The dread is going to get all kinds of white ultramarines markings which will make it look less generic I hope. I have a slew of purity seals to add as well after the transfers are on.

Raiding my bits box produced enough marines for a weirdly spec'd out devastator squad as well. So long as I was going to get the airbrush all setup for the dread, I might as well paint a squad right? I think I might pull a couple of guys out and put tactical markings on them instead of devastator markings so I have some heavy weapons in my tac squads.  I really like the devastator marking more than the tac marking and since it is a transfer I have never used, I must abide by the try everything once rule for this army and officially make the remaining guys devastators.

I've been seen all kinds of checker patterns showing up on miniatures all over the place and am longing to do the same. Some white checkers would look kind of cool interspersed on these models. I am just not committed to ruining the paint jobs just yet!
Posted by John Stiening at 6:20 AM