The Dark Angels Go To War 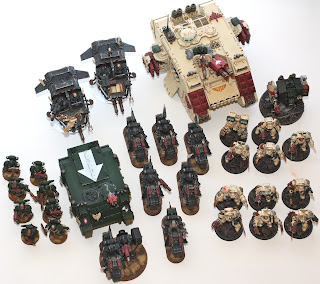 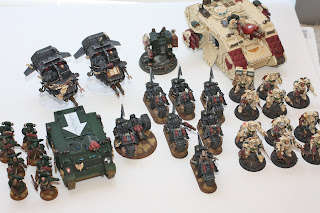 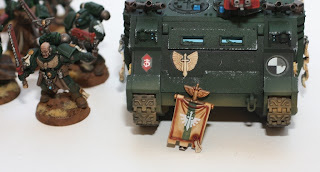 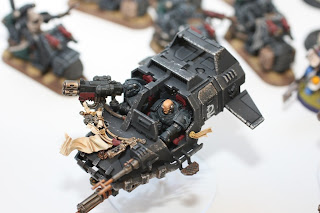 I finally added drivers to the land speeders in preparation for my first large game of 40k. I've done some painting clean up work, but am ready to see these guys on the field. As I have mentioned before, I don't really play the game that often, but I like to use the rules to organize my painting projects. These guys are slated to part of a narrative campaign, including some unbelievably well painted eldar, a traitorous imperial planetary governor and all of the regulars that accompany the slide of an imperial world into the worship of chaos. Today was are just learning the rules, so it will be a straight forward 1850 pt game.
My army has all three varieties of Dark Angels. I've got some green wing vets in a rhino, two squads of terminators led by Master Belial, and a full raven wing squad let by Master Sammael on his land speeder. So now comes the question of how I play these guys. The ravenwing squad can outflank, and scout. One squad of terminators can hitch a rid in the land raider, and I can keep one in reserve for deep striking.
In terms of tactics, my plan so far, unless someone posts some better strategies, is to move the rhino and land raider forward as fast as possible using the rhino's smoke grenades first turn. The rhino should be able to provide a cover save to the land raider which can then use its smoke the next turn to return the favor. I can sandwich Sammael in between, so I can concentrate my firepower on whatever the terminators and vets are driving towards. To ensure the enemy gets where I need them to be, I plan to spit my bikes into 3 units, accompanied by the support speeder. There are two meltas, so I should be able get in melta range turn one. The sergeant has a power sword, so I can use him to tarpit any unit I need to slow down. I think of the bikes as my cowboys herding the cattle to slaughter. The fulcrum of the operation will be the one deep striking terminator squad. Since they will be the least maneuverable, I need to get the bikes in position to drop these guys behind my forward advancing troops. Between them and the bikes I have a hammer and an anvil. I am not bothering to bring a psyker, for no other reason than I don't really think they belong in a DA force. That might prove to be my undoing as Eldar are the kings of weird mental attacks. With this many moving parts I am sure things will go wildly wrong during battle!
Posted by John Stiening at 9:14 AM