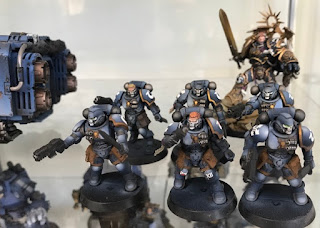 I finished a second set of the easy to build Primaris Reavers today. I still don't know what my blue recipe is, despite a lot of trial and error. The original batch is vastly better, but I think these fit in pretty well. As for basing, no idea. I'll probably default to the same basing I've used for years, cracked concrete. The advantage to that is that these will fit in with the rest of my modern armies.

Thoughts on the new kits.... great...if you only include the easy to build stuff. I think the dreadnought is hellish to build. I'm a huge fan of the easy to build stuff. Sure, I won't have all the cool gadgets, but I will have enjoyed the model building and painting process that much more than I would have if I had spend hours deciphering ridiculous instructions.

*Edit... the new reavers have developed awful white-ish stains in the crevices. It seems the AK-Interactive ultra-matte I used reacted poorly with the enamels. The color is good underneath however, so, I just added a heavy wash of army painter strong tone, to try and recover the models. If this doesn't work these are going to be paint stripped and re-painted. Annoying, but necessary. This army doesn't get to have crap minis in it.
Posted by John Stiening at 12:01 PM