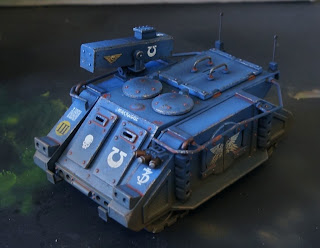 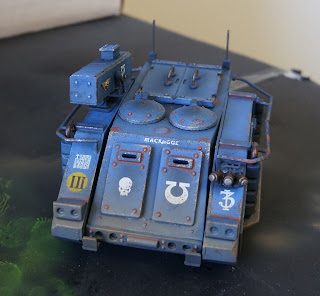 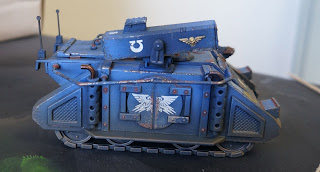 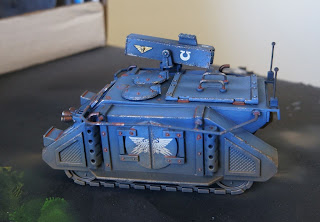 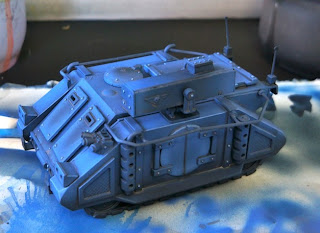 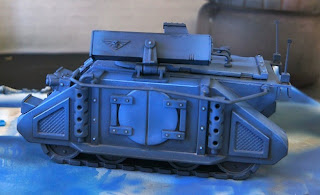 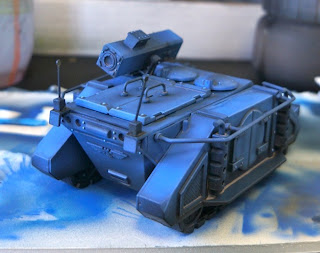 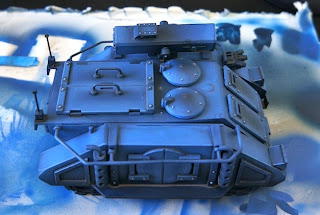 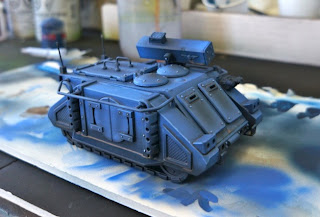 For some time I have been collecting everything Ultramarines, slowly building my stock until I am ready to begin painting my new 'vanilla' army. I knew when I began collecting that I had to come up with a different style for my ultra-marines. I want them to look as cool as I think they are story-wise. So with drive to start a new army slowly building, I decided to test paint a tank to see if my new recipe for blue would work. I did not feel like building a tank specifically for the task, so I reached back to one of my original space marine Rhinos, stripped it of paint, and gave it the blue treatment.

The Rhino is currently sitting on my desk exactly as it is in the photos. The base coat is done, and a light wash of dev mud has been applied, finishing off the pre-weathered chassis. Two thing stand out when I look at the model.

1. How do people paint ultramarines? I started with a black/enchanted mix followed by enchanted, followed by Ultramarines blue. I think I am close to a recipe that works, but I am just not sure. Maybe a light wash of Badab black at the end?

2. Is it possible that old rhinos can look good again? I think regardless of the color decision, I am going to push this Rhino forward. I can always strip the paint away again after the experiment. I have a lot of these rhinos, and could easily field 5-6 of them, so long as a few of them end up as donor chassis for damaged pieces. The real question is whether or not they would look good.

My old tanks have many layers of paint on them. Stripping the paint is almost like a mini-course in archaeology. This specific tank was originally purchased to provide transportation for an Imperial Guard platoon, and had IG markings two layers down. In honor of it's previous designation 3rd Rhino F company command, this tank will retain the number three somewhere on it.

So what is the verdict? Is miniature restoration worth it from a hobby perspective? Should I strip all of the old Iron Scythe Space Marine tanks and repurpose them?
Posted by John Stiening at 10:23 AM