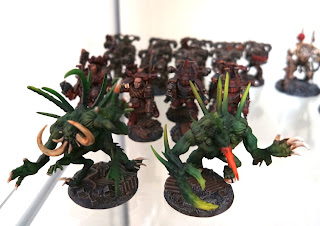 I completed a squad of 10 pink horrors, adding them to the 5 metal ones I had already painted years ago. since the models were so different I decided to paint them purplish to match the greater deamon. This way I have pink and blue horrors.  I'll try to get better photos of these, as the pink horror models are really quite nice. The Chaos Spawn models are a different story altogether....

I hated painting the chaos spawn. In every way I feel like I should love the models.


So how would I fix spawn? I'd put broken bits of space marine armor all around them, hanging off their tortured frames. If there were more to distinct areas to paint it would be easier to give the impression that these are space marines who failed the emperor, failed their legions, and then failed their chaos patrons. They are thrice damned! Thrice-baked potato, does that work?
Posted by John Stiening at 5:52 AM