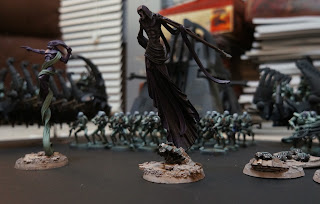 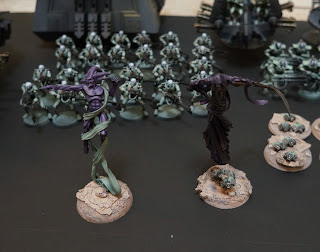 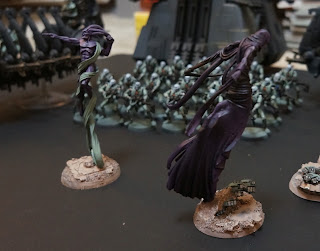 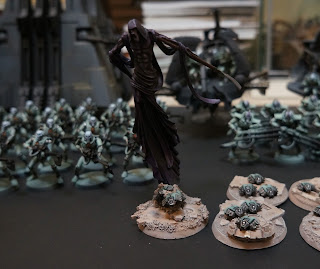 Unclear on my weathering techniques, I decided to just ignore the problem for a while. I did rub off more of the powder and ended up with a slightly better result, but I think I can defer the decision for a while, which will give me more time to practice on old rhinos.

I am already painting this army in unfinished chunks so I decided to just add two purple C'tan to see how well the colors meshed with the overall look. I don't remember who suggested it, but adding purple was a great idea, and I owe a commenter thanks for the idea. The internet rocks! Ctan really don't look like they belong in a Necron force, so I tried to paint them up like purple apparitions rather than regular objects of the material universe. Also, I made sure that some of the minty green color was on each of the models in order to tie them into my royal dynasty. I am fairly pleased with the bases as well. Ruined imperial vehicles make a wonderful base for just about any army, especially imperial ones!

Posted by John Stiening at 5:37 PM