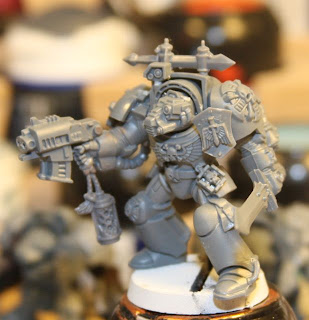 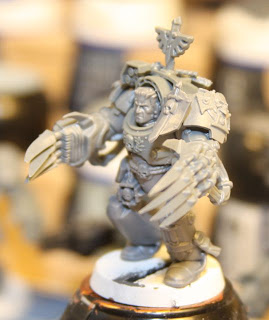 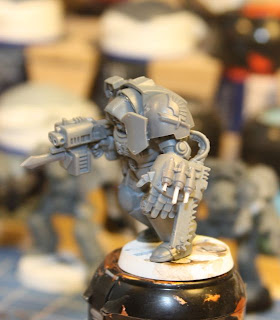 Jawaballs posted an article about whether one paints to play or plays to paint. I use list building as a motivational force in order to direct my painting. Often, my lack of gaming ability keeps me from building or painting the 40k material I have bought. I have the hobby gene, but I also want to be able to take my miniatures to the store, plunk them down, and enjoy a game. It is important for me to build lists that are legal and interesting to paint. The dark Angles have caught my fancy, and I have constructed my belial and one squad of terminators at this point. At this point I need to actually know the list so I can build a legal 1750 pt list with the remaining models. I love the idea of a dual wing or a tri-wing list just because I get to use all of the special bits that come with dark angels, in addition to having three main colors. Here are my preposed lists. I could really use some help to make sure I don't produce an unplayable army.
So both lists have a small amount of each Dark Angels faction. What do you guys think? Do I need to add a thunder hammer to one of my terminators? In one list I get to paint a dark angels rhino which I look forward to, but in the other I get to paint up a Master of the Raven Wing land speeder.
List 1: Death Wing,Raven Wing, Green-Wing 1750

OR
List 2: Death Wing,Raven Wing 1750
Same list as above, but replace the red items with:
Tactical Squad (5 man)

Sammael, Master of the Ravenwing (landspeeder)

Posted by John Stiening at 7:30 AM