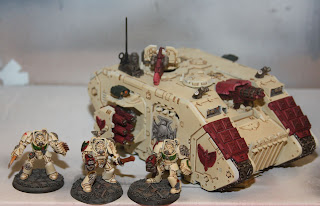 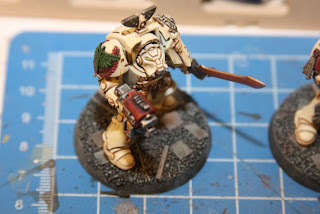 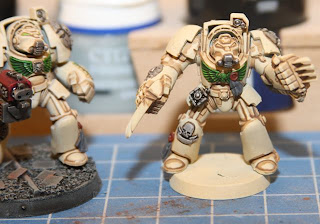 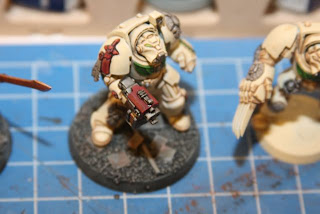 I am churning through deathwing at the moment. Now that I know not to put red and green so closely together on the miniatures I think things are working out. These are really getting an old school clean look to them that I like one moment, and then am irritated by the second. I think I have just gotten used to the idea of mud covered guardsmen that cleanish armor looks weird. The photos do not capture the shading very well, but the I think you get the idea. I met a couple of cool guys named rob at the GW store who were interested in some narrative wargaming, so these DA are being painted up for some hard hitting variety.
The lightning claw guy on the right shows off the inking done with graveyard earth and paint thinner. Once it is dry I paint all of the details, and then go back and clean up the armor.
Now on to basing..would it be weird to base these guys differently than the raven wing they will be supporting?
Posted by John Stiening at 6:49 PM