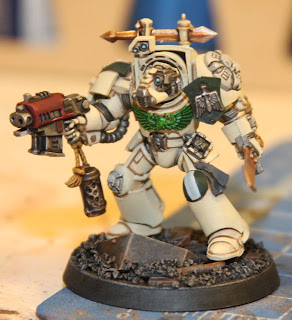 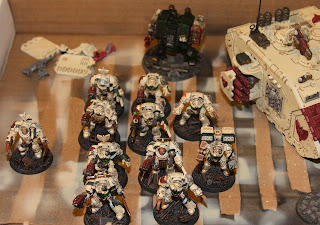 It is snowing like crazy here on the east coast, so I spent the day being super productive hobby wise. I started by making some snow bases for my space wolves. I think the jury is still out on the bases, but I will put up a stage by stage and recipe so others can see what I did. I then went back to my roots and built 11 deathwing ruined city bases. I made them a little darker, and added a lot of broken tank bits.
Just for fun I finished my last three deathwing troops! This has felt like a marathon, so I am so excited to have these guys done and based (ok two of the white dark angels transfers are going on the two guys with green power fists, but this basically counts as done!)
I have the small PA troops + rhino, and then the Raven wing, which includes 1 master on land speeder, 1 regular speeder, 6 bikes, and one attack bike. I am not sure which order I will paint these in. I think the raven wing will come first just because I have never painted a SM bike!
So now I want to game.....too bad there is a mountain of snow outside, and I have never driven my 10 ton rear wheel drive car in it before!
Posted by John Stiening at 8:06 PM