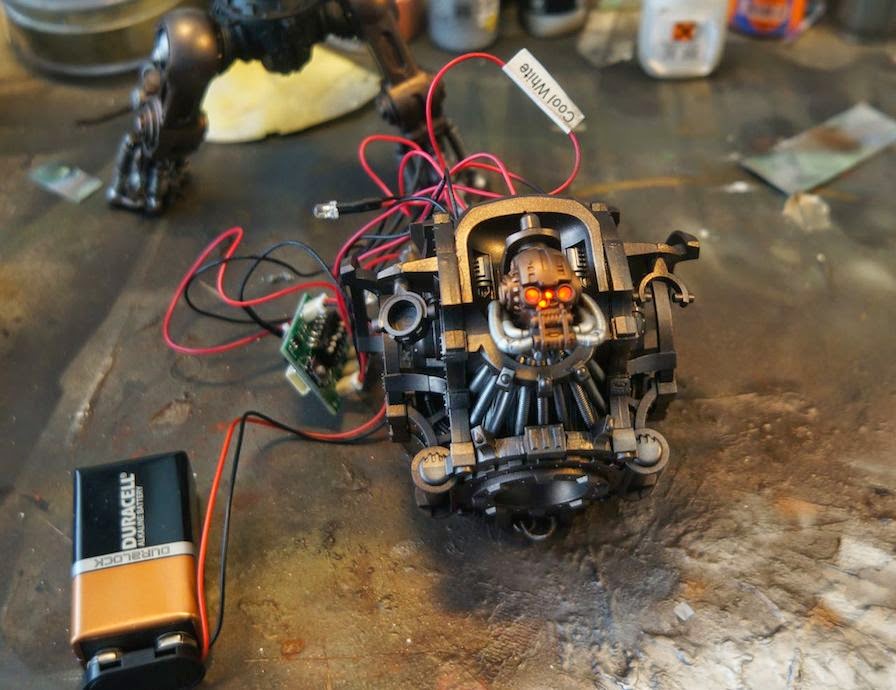 With the lights off the sanded fiber optics can be seen in the eye sockets. I used a square fiber chunk behind the two small center sensors. I think the fiber really tones down the light and makes the model look good when the power is off. 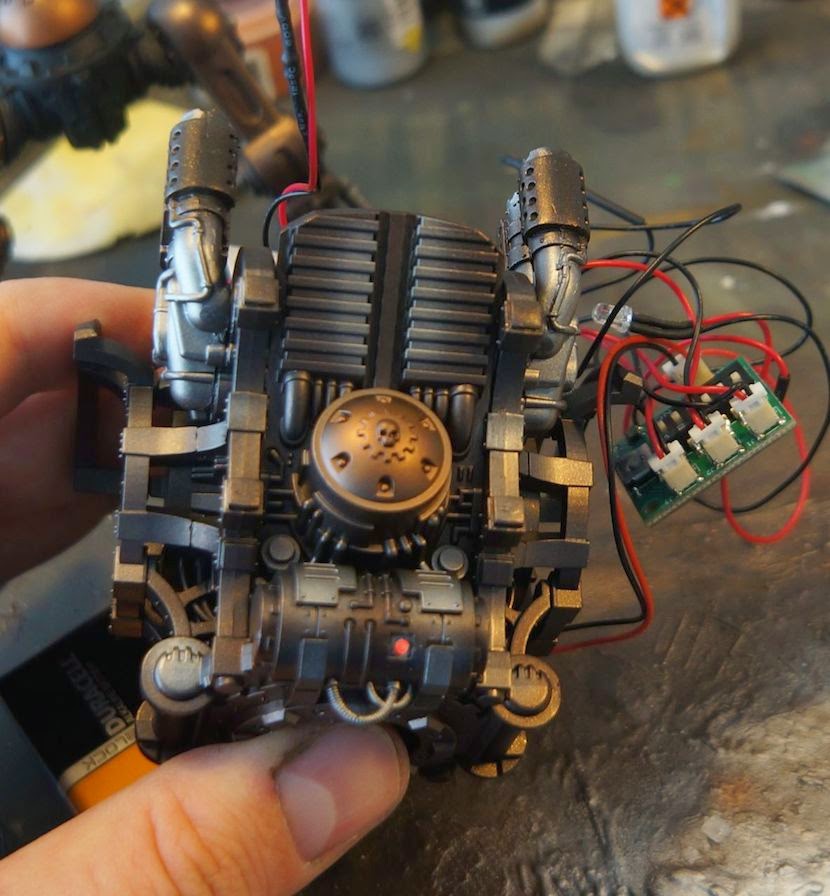 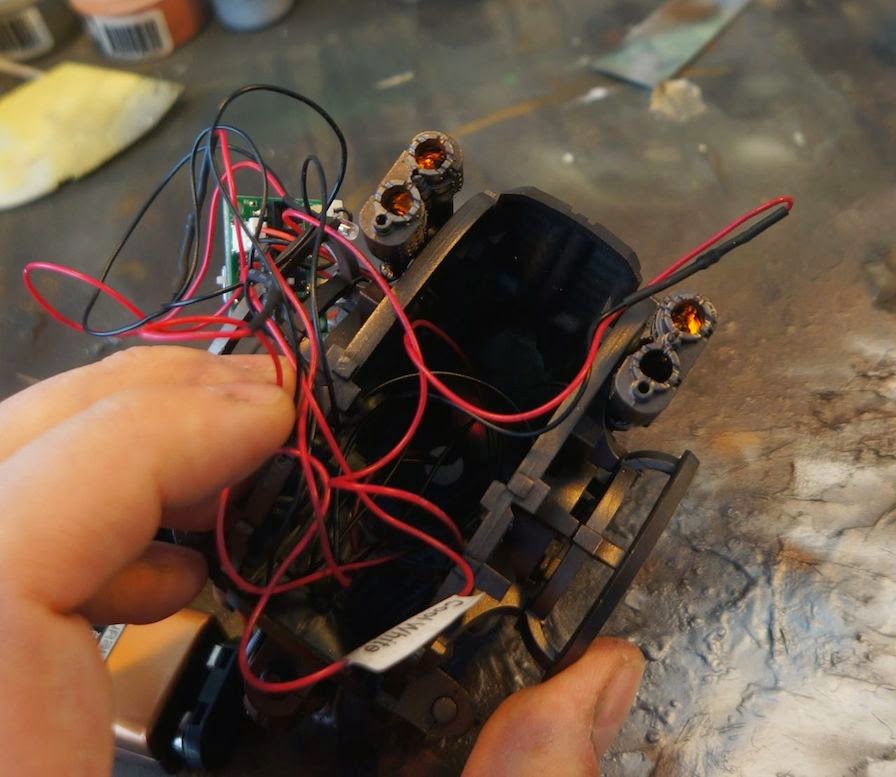 Chunks of aluminum foil were added inside the smoke stacks to break up the light and make it look more like fire. 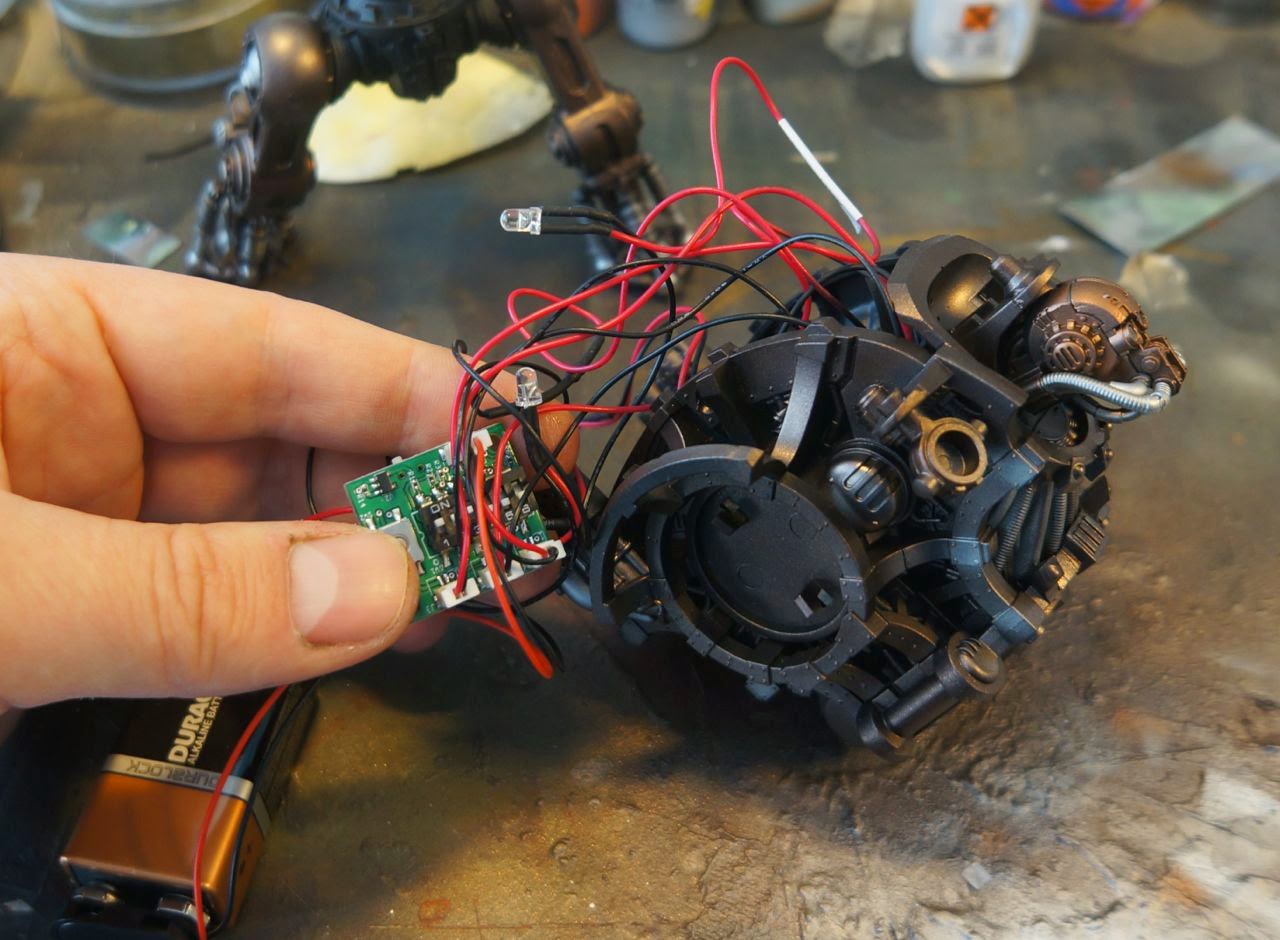 The effects board can be seen here. Those little dip switches control the three sets of light strands. 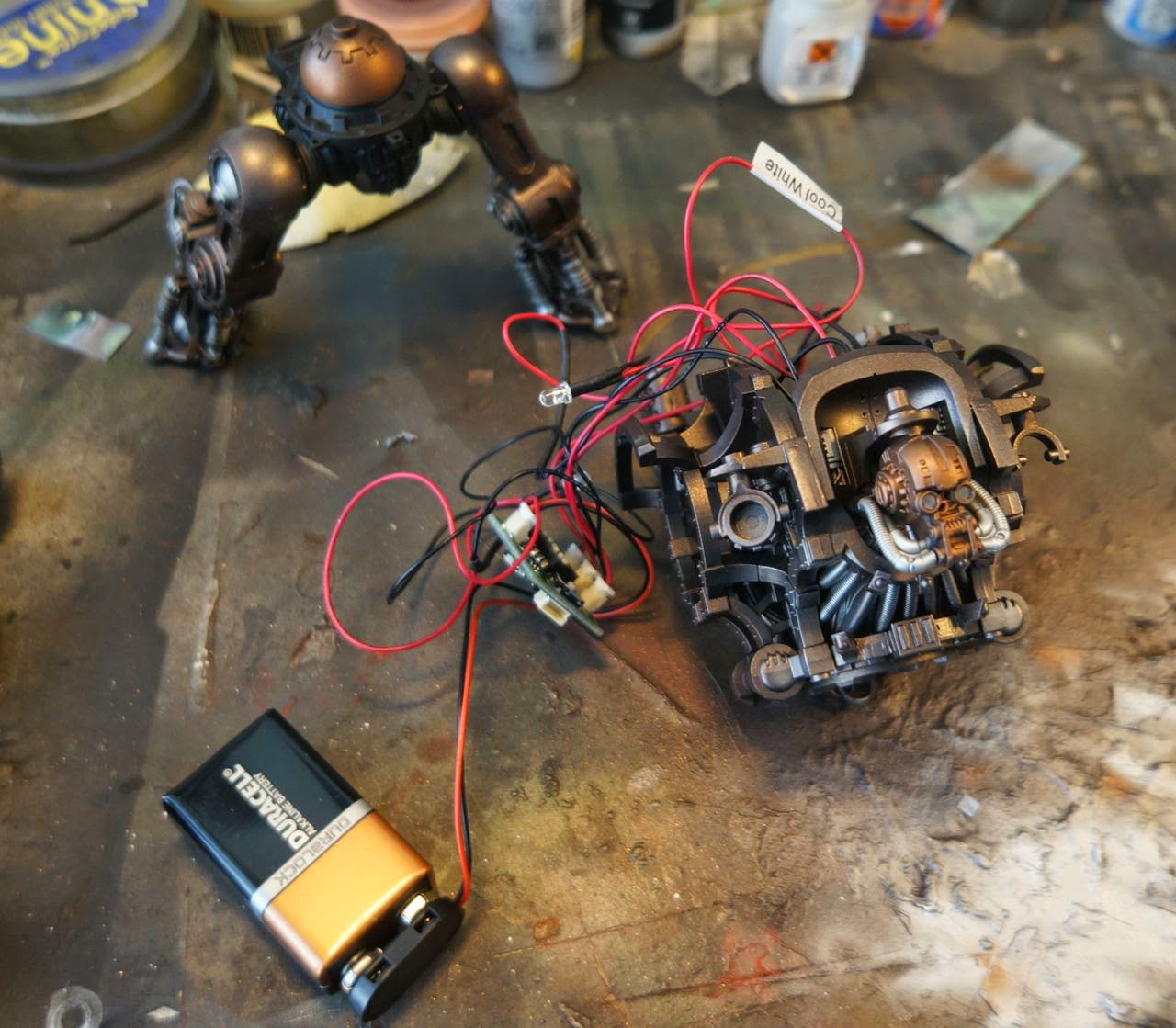 For the past 4 years I've had the privilege of being part a charity army raffle. This year, like the three before it, Doctors Without Borders will be receiving the proceeds. My painting and techniques have changed a lot in the past few years, as my exposure to traditional military modeling, oil paints, and weathering powders crept into my 40k work. This year, I get to experiment with two new techniques, led lighting and crushed glass.

The guys at Powered Play Gaming provided all the lighting, and even sent along an effect generator so I could make the eyes pulse slowly. Whoever wins this army will be able to change the lighting effects at will by taking the top of the knight off, and flipping some dip switches. I plan to set the default effect to a slowly pulsing red glow for the eye, flashing yellow for the smoke stacks, and cool white strobe effects for the sides.  In the video above the faceplate is off so you can see the aluminum foil that I used as a reflector on the inside of the skull. The faceplate had the eyes drilled out, and fiber optics installed as well.

In addition to cool lighting, we have some pretty awesome bases which will be topped off with ruined columns and crushed glass. I've seen crushed glass used several times, but this will be a first for me. Good thing I am trying it out on a giant custom base.

Speaking of bases, Justin from Secret Weapon Miniatures teamed up with Thomas Wynn and Team Leader Dave Taylor to create the custom bases seen here.  So not only do we have lighting, crushed glass, and SWM columns, we have specially produced charity bases. Justin is donating half of every sale of the Omega Bases to the NOVA Open Charitable Foundation.

Would I pitch SWM if Justin had not donated a metric ton of stuff? Yes. I use his weathering powders, etched brass, and washes every time I paint one of my Ultramarines or Sons of Horus. If you haven't used his concrete wash, you don't know what you are missing! It is a shame I can't buy it by the gallon to be used on the Tablescapes clean streets board I purchased. Ah-hem....ship please :) 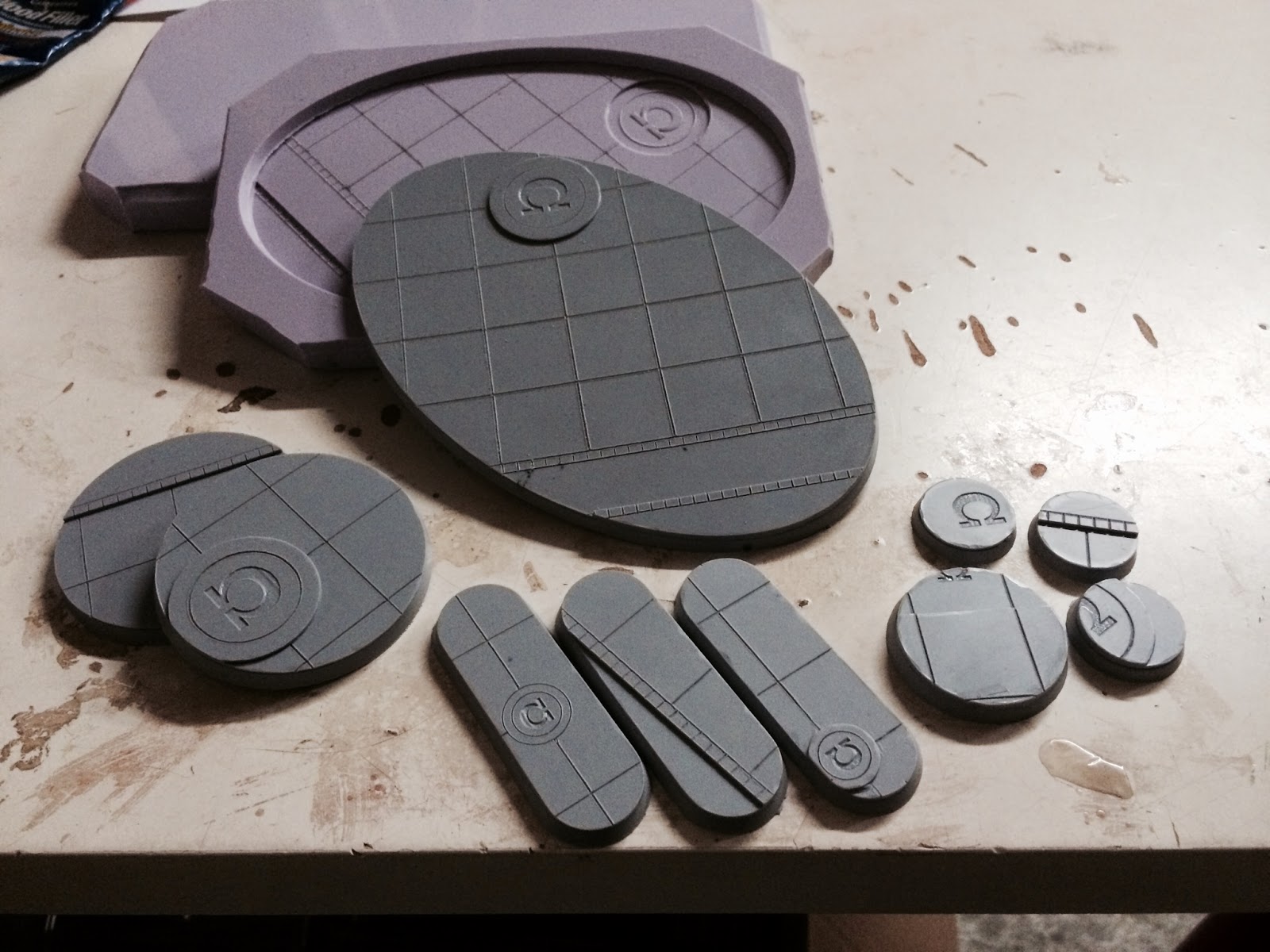 More updates are to follow now that the electronics are in place. It has taken a while, but I am ready to prime and paint. So what color scheme would go well with ultramarines on a dark snow covered base? I was thinking a red Mechanicus scheme or house Cadmus.

*Edit Hawkshroud looks like an awesome color scheme to paint, and perfect backstory for a charity army! As usual, I've grabbed some spare rhino doors and used them for a painting test. 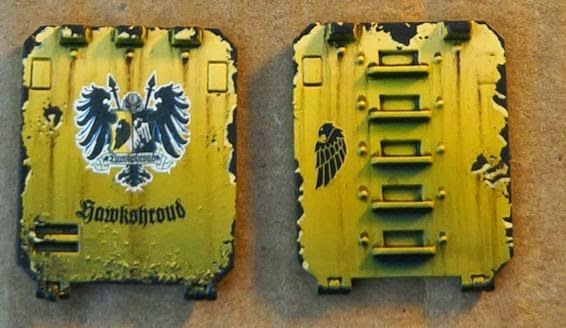 "Kindness is remembered and returned tenfold to those who offer it, and no request for aid is ever denied." Codex: Imperial Knights p. 49
Posted by John Stiening at 2:55 PM