Redemption of the Fallen Army Shot 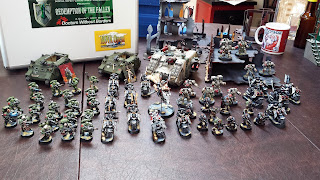 The three distinct color schemes for Dark Angels provide a lot of visual interest across units. There are some stand out models in this force.  If you have not seen it, then you should check out Mike Cho's Grand Master. His work is stunning. While I used an airbrush to paint the power swords, he blended his by hand. He even did it faster! The rhino's deserve just praise. The freehand is incredible. I would never run them as razorbacks if I had freehand designs like that.

As primarily an army painter, and not a gamer, It never gets too far from my mind that many people view the models as just tools to play the game. I see models as the ends and not the means. Mike Brandt referred to the painters of the charity army as artists. I had never considered what I do as anything other than hobby, other than a series of techniques that achieve repeatable results. If you want to paint in bulk, it becomes very procedural. I like thinking of my painting as art. I think everyone who paints a miniature should consider it art.


Now, since our art is now in the wild. Does anyone have photos of the devil dogs from Heroes of Armageddon, or the LR from Storm Wardens? I would love to see those models on gaming tables blasting the crap out of other units.

Posted by John Stiening at 9:06 PM