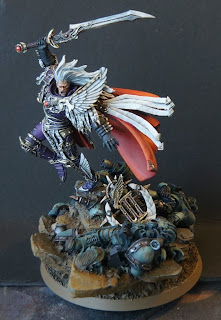 I painted the III legion standard this morning to see how it would look on the base, but the closer I got to finishing it the less I liked it. My inclination now is to remove it from the base, since it draws attention away from Fulgrim himself. The other issue is that the casting of the standard is poor. Weathering powders could make it look realistically damaged. What do you think? Should I just remove the legion standard? I could always add it to an actual standard bearer. I've already decided not to paint up Fulgrim's gun because it looks cumbersome, but it feels weird to be editing off parts of a forge world model. Maybe I have too much forge world respect.

The last thing to do for this model is select a rim color for the base. It was suggested that I go with a darker brown, which I think makes sense. My first choice of black, may distract too much.

I have a painting marathon head of me this weekend. I need to paint more Ultramarine troops for the NOVA narrative campaign, as well as complete a few more entries to the crystal brush.

Posted by John Stiening at 8:34 AM