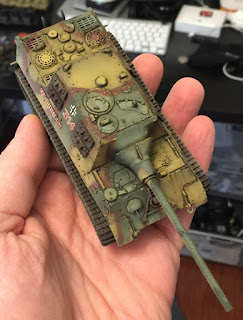 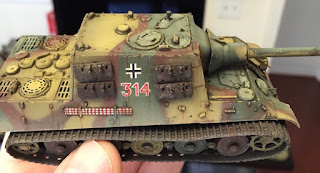 I've been experimenting with camouflage for a while now, however I've been posting the results of that work. The Royal Tiger here (using the terminology from "Tigers In The Mud") was my attempt at German three color camouflage from the western front. This color scheme was produced using poster tack to mask off areas of the tank. The tracks are not complete yet, nor have the oil stains been added, but I think this guy could show up in a game and nobody would complain.

I warned you with rant brackets so here goes... This model came with vinyl tracks. The directions said that a heated screwdriver should be used to melt each track into a single piece. That worked exceedingly poorly for me. Everything about working with these vinyl tracks was awful, and the huge mess I made on them means that I have to put way more mud on the tracks than I normally would want to.

Just say no to vinyl.

Posted by John Stiening at 5:25 PM