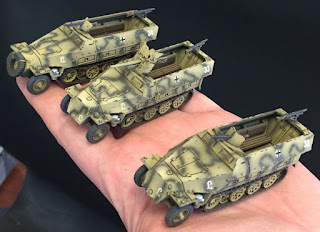 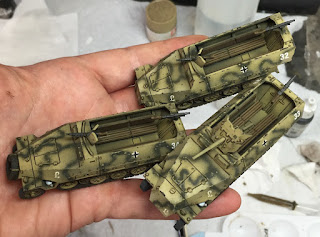 Germans had an unusual approach to painting camouflage on vehicles during ww2. For large stretches of the war vehicles were delivered in dark yellow, and it was up to crews to paint the camouflage on. For a modeler, this has the advantage that there are a huge variety of camouflage patterns.

Since our group is continuing to delve into Bolt Action at 1/72 scale, and I had already painted up US half tracks and trucks, it was time to give the german players some transport vehicles to use. I went for dark yellow with color modulation with green stripes meant to look like crew members sprayed on the green paint. These models still require some streaking grime and pigment work, but they are probably usable in this state.

As interesting as German paint schemes are, I am excited to give British 8th army a shot. Their early vehicles sometimes used sand color, grey, light blue, and pink in a bewildering sharp pattern.
Posted by John Stiening at 9:55 AM