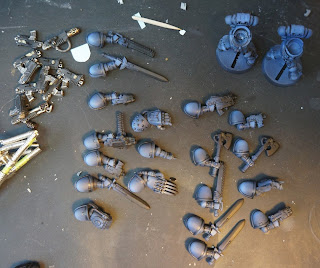 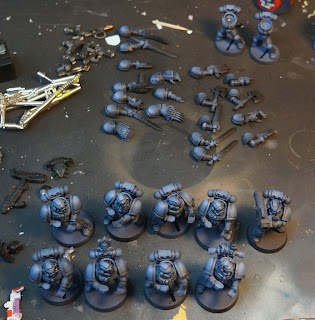 After magnetizing my terminator arms, my pea brain finally made the giant leap to magnetizing my regular powered armor arms. I don't know why it took me so long to reach the same conclusion as everyone else on the net, but it did.

One of the downsides of magnetizing arms is that painting highlights is very difficult, since the position of the arm can change. The upside is that I get to field basically any combination I want. So after magnetizing two dudes (chassis as they will be known going forwards) I can arm them (yep arm joke) with the following:

All that for two chassis! (heads will also be magnetized)

The main goal with all of this is to use what I learn doing my ultras to help me with my pre-heresy armies. The Horus Heresy book has a list structure that is different enough from the current codex sm that I want to be able to swap out equipment.
Posted by John Stiening at 2:28 PM