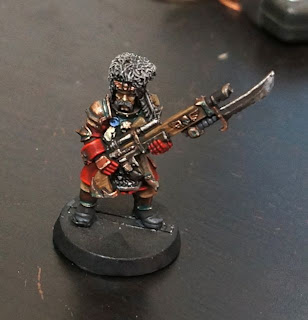 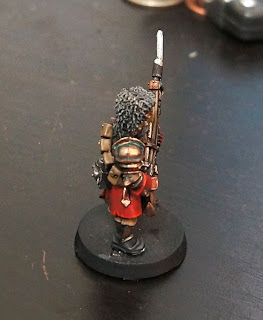 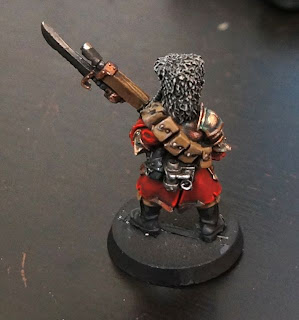 I know I said my next paint experiment using the new paints was going to be an OOP rhino, but I decided last minute to paint something that would be easier for me to strip. A few minutes later I had Vostroyan trooper in hand. It makes sense after all, aren't regular army types the traditional guinea pigs for experimentation?  This miniature was painted using the following rules:

I'd tell you which paints I used, but the names are ...well you know.

When I showed the mini to my wife and asked her what she thought, she paused for a long time. "The paint is think" was her primary remark. If you've been following my work for any amount of time, it should be apparent that I like as little paint on a model as possible. It is why I use airbrushes for my base coats, and why I thin my paints as much as possible. I don't like the look of heavily painted models. On the other hand, I don't think this guy is as bad as my first test mini with the new paints.