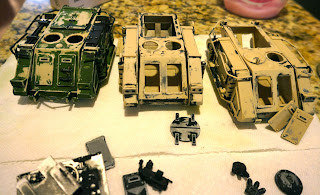 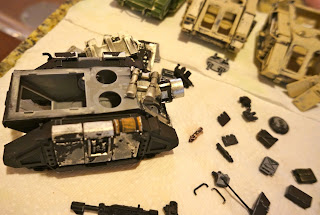 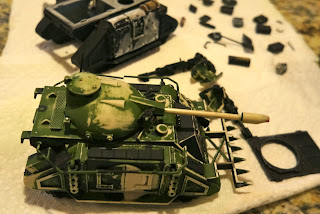 I haven't posted not because I haven't been working, or wanting to post, but because I bit off more than I can chew! Despite an accurate assessment from Ron, I couldn't resist dunking my old Iron Scythe armor in two tubs of simple green. Three rhinos, a predator, and a vindicator will be added to the pre-heresy heavy Ultramarines force I've always wanted(always is relative here...I am a collector after all!). I think these tanks will look spectacular next to a FW Proteus Land Raider, maybe a few bikes and a load of space marines ready kick ass and take names. It was really cool seeing a nice paint job on an old kit. I've had these since they were released, so these things have been lingering near my painting desk for a very long time.

Anyone know when this kit came out? Maybe it is the whole 25 years of 40k, but I am considering entering this new force in armies on parade instead of my minty Necrons. The neurons are certainly better painted, but nostalgia has its place as well.
Posted by John Stiening at 6:50 PM