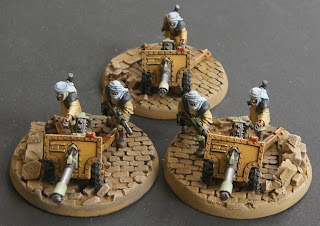 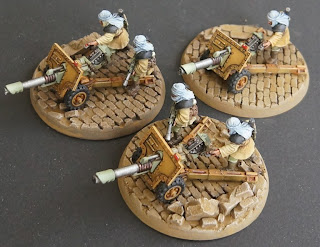 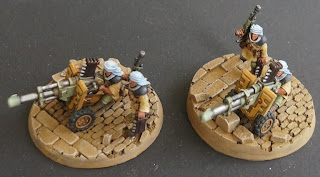 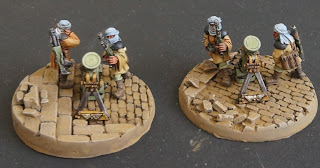 Final blending on the soldiers is not complete, but I really wanted to base them. So I did. I found a pack of forgeworld IG stowage, which I'll add to the bases to fill in some of the blank spots. I think that will spice these up quite a bit, as well as let me get some more green on the models.  In the Armies on Parade pictures you'll see how well the yellow complements the blue of the Ultramarines.  I'll have to select only a few of these guys to join the force, since the bases take up so much room.

I had been worried that with only two base styles that the force would look too uniform, but I think all of the extra rubble customizes the bases enough to overcome this.

Do paint a tank today, or do I paint rough riders or Mumaks? I managed to pick up a Malcador on ebay, but I could paint a chimera instead . (or a pair of egg shaped sentinels...forgot about those)

Posted by John Stiening at 7:36 AM