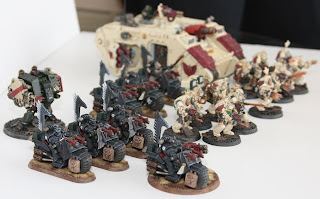 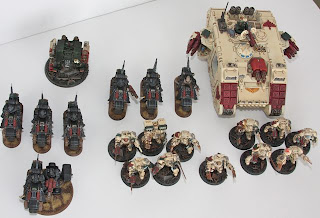 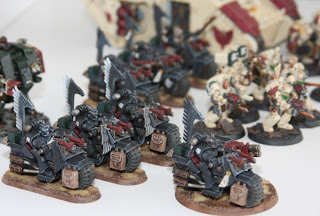 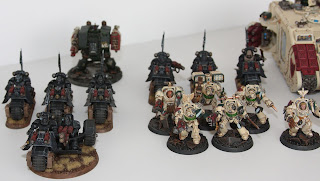 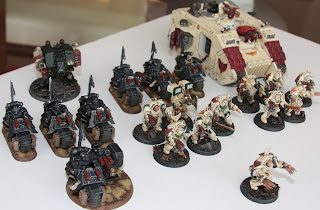 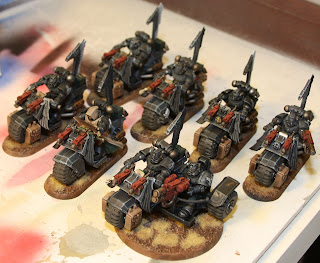 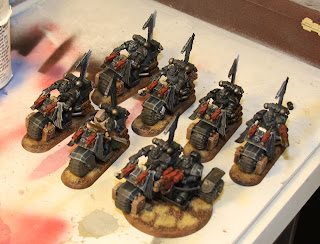 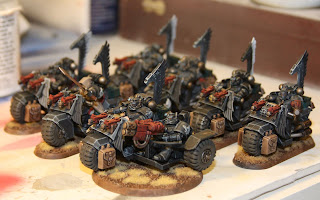 I had planned to do Mars like red earth basing for these guys, but woke up this morning and just based them with dirt and dead grass. I still haven't painted all of the wings, feathers, or done a lot of touch up work, basing them seemed to give me more focus. I am starting to like the miniatures now. You can't see it in the photos, but I added the cool looking gothic numeral 2 to their shoulder pads from the transfer sheets as well. I tried the forgeworld powders on the bases, but the dull coat ruined the effect. I may give a dusting to the bases and the undercarriage of each bike.
I put up a few shots of the force as it stands. For some reason I am painting this army differently than any I have before. The land raider still needs its hatches put on, there are touchups to the terminators to do, there are final decals, and heraldry partially completed this in addition to the RW being partially done. Even with all of those todo items, I am happy with how it is turning out. In the past I would have painted a full unit and then moved on. With these guys I am content to get them mostly done and then move onto the next unit so I have it to field. It is a different approach. The hobby itch is starting again, and I think I will paint up a DA rhino even though I have no PA squads. I need to build two land speeders so I will be done with the RW, but I just want to paint something green!
Hopefully I will be able to get a game in today, using a combined DW RW force for the first time.
Posted by John Stiening at 8:41 AM