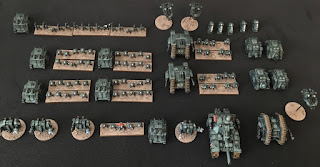 I had a packed of GW rectangular style bases arrive and decided that meant it was time to paint up some infantry. I have one detachment of tactical, three stands of devastators, four stands of terminators, and one captain stand. Once I complete two war hounds, I will have the basics of a nice little Sons of Horus force. I plan to paint up a World Eaters force to complement these. The change in color pallet will help keep the painting interesting. After that, I might have to tackle the Imperial Guard army. I managed to find two pristine Imperial Guard detachment boxes from the Epic 40k relaunch, which includes Valhallans and Catachan jungle fighters. I think those boxes are going to be a bast to paint.

Posted by John Stiening at 7:57 AM