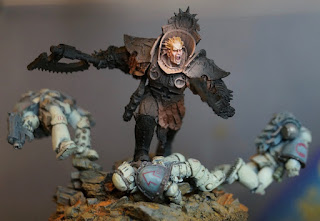 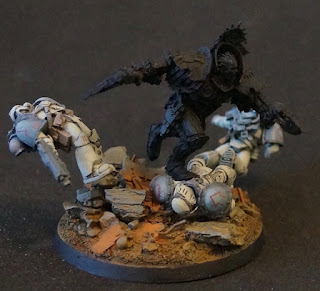 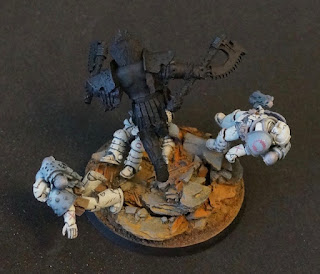 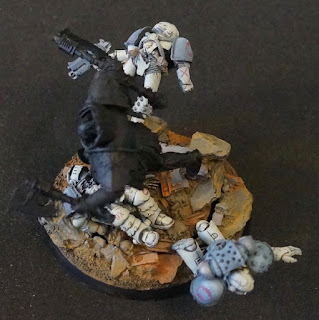 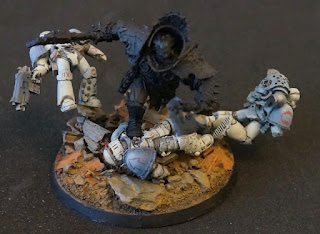 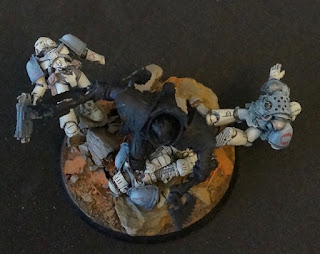 I've had Angron sitting in a drawer since he came out. Never satisfied with my color scheme for my World Eaters, I let him sit unpainted for years. The thing that made them work for me today was using a very pale blue for their shoulder pads. I am definitely going to paint up a small force of World Eater loyalists now. The pale blue and touch of orange on the bases really works for me. (less so for the camera which struggled here!)

One note about the chains on the wrists of two of the troopers. I know they signify killing a superior officer in gladiatorial combat. One would think loyalist World Eaters wouldn't engage in that kind of activity. However, I think it makes sense that Loyalists would have gone along with gladiatorial challenges as necessary to simply exist within the legion prior to Angron turning traitor. Dueling to the death was simply a fact of life within the legion. I think NCOS and officers would not have had a choice on whether to engage in the practice or not.

*Just learned that the World Eaters are the 12th legion not the 8th! Looks like I put those decals on upside down. So, these guys are the 8th chapter of the 12th legion. How about that! I kind of like the symmetry here. The ones who remained loyal are the mirrored image of those that did not.
Posted by John Stiening at 2:42 PM