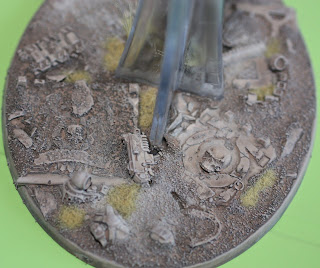 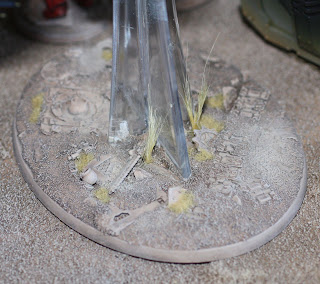 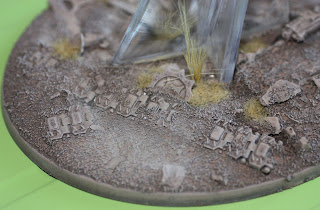 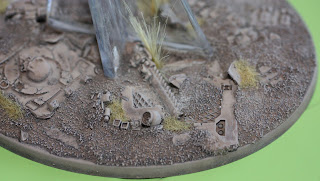 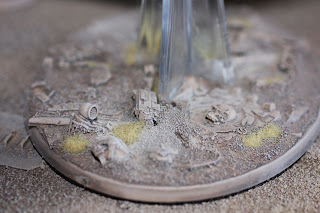 I have plans to make a bunch of more interesting flying stand bases using some ruined cathedral parts that I have been casting, but in order to finish the model so I can potentially field it in the NOVA open (yes..dark angels are too hard!) I decided to go with a mostly flat ruined SM vehicle theme that I use on most of the miniature bases. Creating the base was really easy. Basically I grabbed a bunch of imperial debris and glued it onto the base as you see above. Areas were built up afterwards using GW sand and glue. There is not much to it.

The painting is just as easy. Watered down (soupy) khemri brown was applied liberally over a white base coat. The foundation paint will separate as it dries to form the dark brown/black areas in addition to the lighter areas. After the soupy paint is dry a quick dry brush of deheneb stone finished the painting. A few dabs of flock and the base was done.

I was tempted to paint the ultramarines parts blue so the base would have a little more going on, but I think keeping it mostly monotone is a good idea. Once the model is fully weathered there will be plenty to look at.
Posted by John Stiening at 2:39 PM