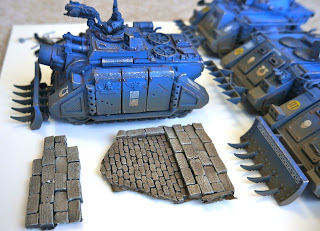 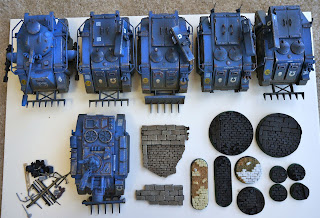 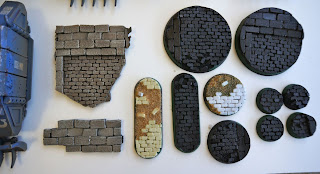 My Ultramarines project was put on hold for a business trip to the UK, which lent itself to a forgeworld buying spree at Warhammer World, but did not mean much progress painting. Before my trip I started working on some bases for my ultras. It took some time for my master sculpt to be ready to cast, but I can now produce streets with sidewalks pretty easily. With some bases ready for the first stage of casting, I thought I would paint up some of the masters just to see what the force will look like color-wise. For these bases I went with a black undercoat, graveyard air brush, and then bleached bone dry brush. Along the edges of the sidewalk I placed a diluted dev mud wash. I was thinking on top of this I could add, marble ruins, as well as some dead looking static grass.  I think the colors are meshing well enough for me to proceed.  Even though I have a load of FW vehicle stuff to paint, I just feel in the mood to make the armies bases. If only I could hurry the silicone curing process so I could get the molds made for the bases themselves.

One of the questions I now have is whether I should attempt to mix into the force some FW demios rhinos and predators. (Being so close to FW forced my hand. I know own 7 of the PH kits along with a Cassius)
In addition to my FW order awaiting me when I got home, I had a package with an original rhino and one of the rhinos with the meta predator destructor conversion kits.  The old rhino/predator came painted in 4th company Ultramarine colors,  which I am likely carry through during the repaint. It seems right  to honor the person who so carefully painted these tanks decades ago. It makes you wonder what will happen to all of your miniatures after you move on. (either from the game or from life) Very few people consider miniatures art, so collections could easily end up in the dump. What a strange and wonderful hobby we have!

Posted by John Stiening at 9:15 AM