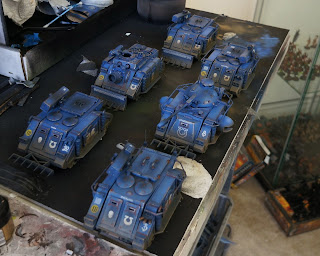 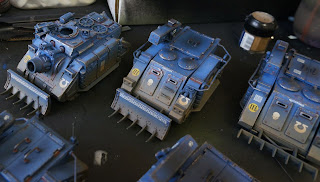 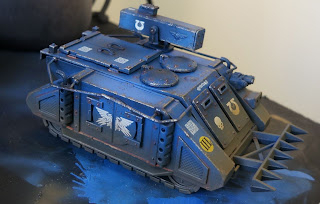 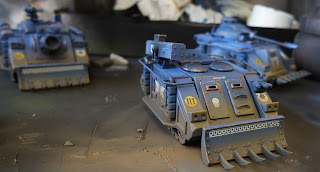 The transfers and base coats are done. Most of the details are not painted, but enough is done for me to see that this is the Ultramarines force I have always wanted. There are a lot of missing elements that will help tell the story. One of those is the stowage that I plan to add to each tank. I picked up some gauss to experiment with as well, which I hope will make one of the rhinos look like it is carrying a lot of stuff.  My plan is to build a replacement top hatch that has the equipment on it, which I can remove and use as objectives, or just have sitting separately. Another missing element is a deep warm red, which will be added by way of the sensor part of the spot light bit. I have all four of those ready for paint, and can't wait to add some warmth, and gloss to the model. Over all, I think this is not bad for a lazy Saturday!

I think I may want to enter this army in the Armies on Parade competition, but that makes my Herculean effort spent painting minty Necrons a wash. It also means I will have to build a new display board. Additionally the competition says that FW stuff is not allowed. Ideally I want to use my FW dreads, LR, and early mark troops, but I think that might be frowned upon.  In any case I plan to paint up a squad of scout bikers to add to the army.

Posted by John Stiening at 2:16 PM