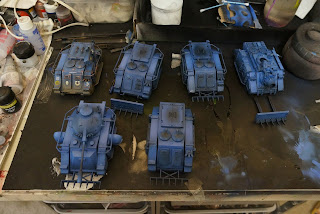 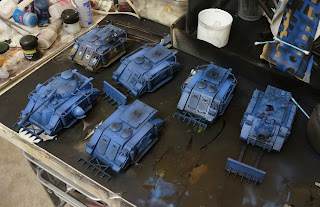 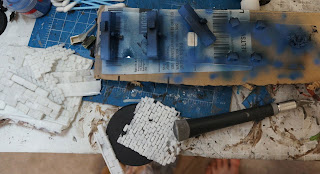 My MKI rhino painting factory has begun! First off, I had a bear of a time cleaning up the remainder of the tanks. Some of the models were in just terrible condition after I had stripped most of the paint away. In order to deal with the deficiencies, I am going to heavily weather these guys, making the broken bits battle damage, and the chunky repaint areas rust. In these photos the first round of dev mud is on the tanks, hopefully settling in as very light shading. I can see some areas where the wash is pooling kind of grayish, but it is too late to do much about it. The next step will be the rust weathering around the rivets. After that I'll apply the decals before chipping the paint and adding the dust on the tracks and lower portions of the tanks. I've decided to add a lot of dark grey storage containers on the tanks, as well as search lights and hunter killer missiles on each vehicle. I think the additions really make the models stand out,  with the added bonus of making them look more uniform.

In the last photo you can see the beginnings of my new bases. I've decided to put the marine on dusty broken streets. I think it fits with the ultra marines. I may try to add some ruined imperial columns or something to the larger dreadnought bases.

It may sound a bit odd at this late stage, but I still don't know if this color scheme will work on a regular old space marine trooper.  So far I have only painted a single Ultramarine. Fortunately, the vindicator model came with a tank commander, so I am trying this technique out on hime prior to stripping the model and painting it mechanics red.
Posted by John Stiening at 1:31 PM