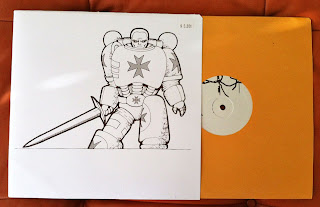 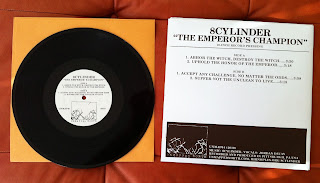 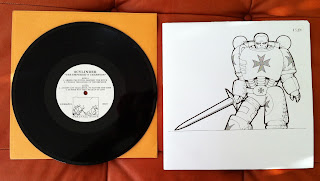 Sometimes really weird stuff shows up at the office. A friend of mine from college sent me a note asking for an address to ship something that "I would not want, and probably could not use." Naturally I thought it was related to college gag we had going years ago. What turned up from the good Dr. was incredibly cool, a Black Templars themed album. In every way this hits the 40k button perfectly for me. Modern retro! (notice the soft orange leather ottoman in the background---mid century modern is where it is at people) I may have retro furniture, but I do not have a record player. I'll have to rectify that. I mean who doesn't want to hear tracks like:

Side A
"Abhor the witch, destroy the witch"
"Uphold the honor of the Emperor"

Side B
"Accept any challenge, no matter the odds"
"Suffer not the unclean to live"

What an awesome gift this is. I thought that the two pre-heresy land raiders by wife gave me for Christmas were cool. This is far cooler. I've been wearing a smile since this arrived. Maybe this is a sign to use all those FW goodies I've been collecting and make a Black Templar force?

Posted by John Stiening at 7:34 AM