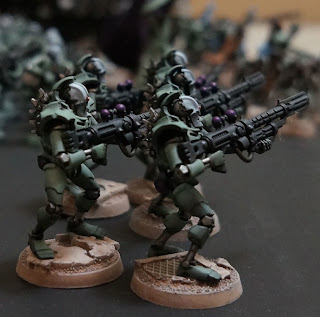 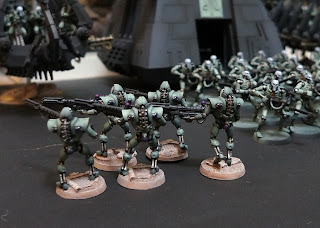 These could have been tesla equipped Immortals, which would have added the first tesla equipped troops to my army, instead they are Deathmarks. The rules for these guys do not make much sense to me. Short range assassin snipers that show up just in time to be shot during the other players turn. Despite that, the story behind these guys, that they are the assassin class of the Necrons, and the cool cycloptean look of the models themselves ensured that I would end up painting a squad. Usually I can imagine fielding even the worst units. These guys take the cake. I think they are going to sit nicely on my shelf next to their Necron brothers, and simply provide me visual entertainment.

When I was prepping my second batch of neurons, I stripped the sprues and dumped the contents into open box lids. It turns out that it takes very specific arms to make theses weapon configurations work. Much like the Ghost Ark, where I failed to read the fine print, I found myself trying to dry fit each arm to each weapon. One of minis looks like his shoulder is being torn from the socket. But I suppose that is what you get when you are a short range in your face sniper without any close combat ability! I added red as a new color for the army, and plan to add red gems/lights to the tops of the ghost arks. I used the purple color again, on the weird dangling balls on the back, as well as the embedded globes on the back armor. I am slowly settling on the the scheme that purple means weird warp technology, red is non Necron eye sensors, and shaded blue/white are power weapons or gauss cables for cause weapons. I think those colors will add all of the contrast I need for the army.

I've got a batch of triarch praetorians on the painting table now. I think those guys are considered useful in people's army lists, so they might see some action on the tabletop.
Posted by John Stiening at 6:08 PM