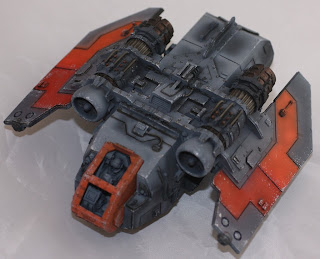 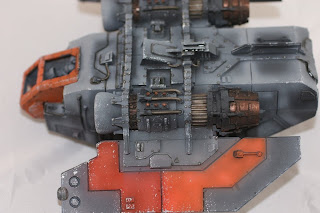 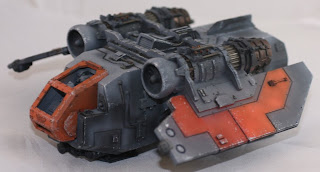 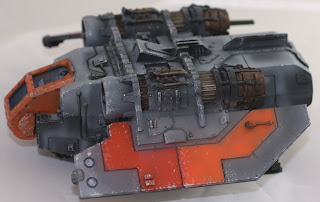 My Imperial Lightening fighter needed something to escort on in, so I decided to paint up the Arvus Lighter that my wife gave me for Christmas. Originally I had intended to paint the whole ship dark red, using grey pre-shading to help the color transition. However after getting the pre-shading on, there was something about the color that made me want to stick with it. Star wars has conditioned me to think of grey and orange as good starship colors, so my inner-inner geek had to go with it. The weathering on the model is just starting, but I think some character is already coming through. '
I still have landing gear, cockpit, stains, weathering powders, and the obligatory nose are to put on this thing before I try to mount it on its flying base. When the Imperial Navy is not using it, my Astral Claws will be. (of course that would require me to paint more than 1 squad of the tyrants legion)
Posted by John Stiening at 8:43 PM