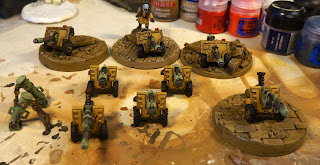 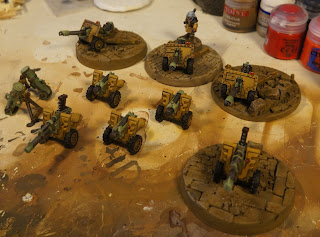 My tallarn now have a small arsenal of heavy weapons with which to pin down the enemies of the emperor. I don't know what weapons are good in an IG list, so I painted up the heavy weapons which had complete teams. The two mortars and two autocannons can be divvied up into squads, while the two teams of three lascannons and heavy bolters can make up heavy weapon squads.

Initially I wanted to paint the mumaks today, but I've saved them for so long a few more squads painted won't hurt. Once all of the respective troopers are painted I think I will have had enough painting under my belt to be confident with the 'maks. Despite their large size, the riders and bits are relatively delicate, so I don't think they would take paint stripping well if I screwed up. Better to paint more of the easily simple-greened minis first.

I hope everyone in the US had a wonderful memorial day.
Posted by John Stiening at 5:20 PM