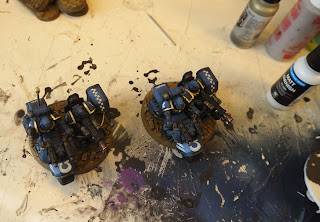 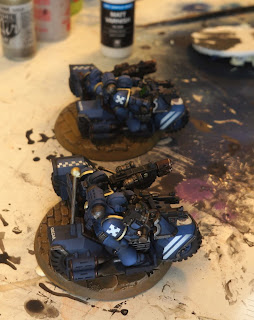 My last squad of bikes is nearing completion. This gives my ultras a scout bikers, regular bikers, and one squad of two attack bikes. These miniatures were ebay finds, so while they were unpainted they were built when I received them. Normally I paint in sub assemblies for ease of painting and then assemble at the end of painting. There are those times when I get really excited to see a model built that I go whole hog and build the entire thing, but I usually regret that by the time it comes to painting.

Before weathering I plan to add a spray of dull coat to the entire miniature. I'll have to paint the metallic parts again, but I think that is better than living with the weird oily sheen nuln-oil wash left on the mini.

The three squads will be dusted together and then have their stowage added at the same time.
Posted by John Stiening at 6:27 AM